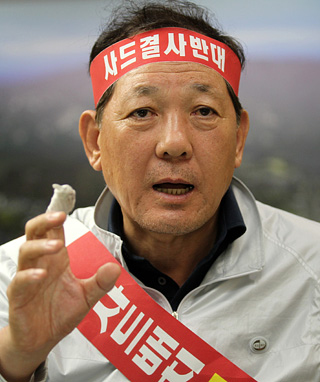 Kim Hang-gon, head of the Seongju County office in North Gyeongsang, is interviewed by the JoongAng Ilbo on Thursday at his office. [GONG JEONG-SIK]

Kim Hang-gon, head of North Gyeongsang’s Seongju County office, stated his firm opposition to the deployment of the U.S.-made advanced missile defense system during his interview with the JoongAng Ilbo on Thursday.

Calling the central government’s decision to set up the Terminal High Altitude Area Defense System (Thaad) a classic example of a “unilateral decision made behind the doors,” the police officer-turned-elected official demanded a through and objective examination into the potential effects of the Thaad system’s powerful radar signals on human health.

The county chief said while he would not outright dismiss the Defense Ministry’s announcement that the missile battery poses no harm to humans outside of its 100-meter (328-foot) radius, recent scandals involving threats to public health have left him with “no trust” in the government.

“Has anyone from the government come to Seongju to explain their position to our residents,” he asked, “or tried to persuade us to accept their case? They simply made their decision behind closed doors and now want to force us to take a facility that no one wants to take.”

After the Defense Ministry’s final decision to set up Thaad in the small county of Seongju, a town of about 45,000 people known for its melon farms, Kim led thousands of angry Seongju villagers to Seoul on Wednesday to stage a protest at the Defense Ministry. He even cut his finger to write a message in blood expressing his staunch opposition to the decision.

Under a sweltering sun, villagers led by Kim chanted “No Thaad in our town,” while carrying banners. County chief Kim went on a hunger strike and shaved his head in protest on Thursday.

Asked whether there had been movement by outside groups, mainly made up of leftist anti-U.S. civic protestors, to join the protest, Kim said “No” and emphasized he would not let such outsiders join his opposition force.

“This is our problem and therefore we will solve it ourselves,” he said. “We do not need interference by outside groups.”

Nevertheless, police found signs of outside involvement with two anti-Thaad rallies that had been staged without prior registration. It is reported that a number of members from one leftist group, whose name can be translated as “People for Peace and Unification,” were seen among Seongju residents in recent rallies.

Kim said he had learned of the government’s decision to choose Seongju for the Thaad deployment only five hours before the official announcement on Wednesday, when he received a phone call from the Army’s 50 Division Commander requesting him to meet with the vice defense minister.

“Even to build a factory in a regional area requires consensus from residents,” he said. “The government pushed the Thaad decision without a single word with us.”

He added that his office was preparing to take legal action because the ministry skipped an official evaluation on environmental effects by the Thaad deployment.

The county head said Defense Minister Han Min-koo suggested a trip to Guam, where the U.S. military is running its Thaad battery, during his meeting with Han on Wednesday so that he could see its operation up close.

“I asked him to report to President Park Geun-hye how much we are opposed to the decision, but Minister Han just told me changing an official policy is difficult.”

On Minister Han’s proposed trip to Guam to inspect the facility, Kim said conditions for the Thaad battery in Guam should be the same as those in Seongju.

The anti-missile system will be installed at a military base in Seongju on high ground at an altitude of 393 meters, according to the ministry.

“I heard that a Thaad radar in Guam is set up in a flat field,” Kim said, “which is different from our case. Unless surrounding conditions are matched, I will not go to Guam because an accurate evaluation will not be possible.”