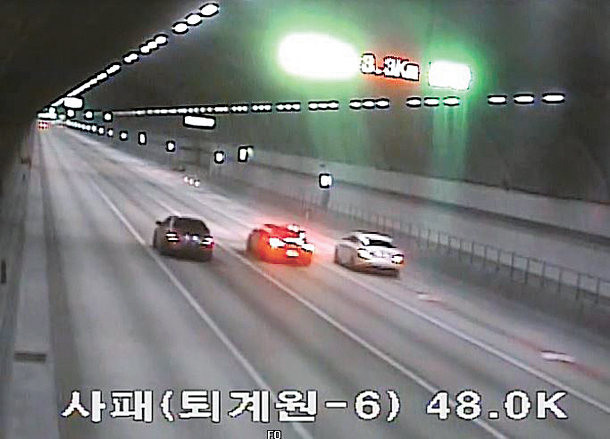 A CCTV inside a tunnel in Mount Sapae recorded the racing of luxury imported cars in May. [THE SEOUL METROPOLITAN AGENCY]

Seoul police announced Thursday that they have rounded up 73 people involved in racing their luxury cars on public roads during the wee hours of the night.

From May 2015 to May of this year, police found 73 people who participated in 22-kilometer (13.6-mile) races from the Jangam Station in Uijeongbu, Gyeonggi, to the Songchu three-way intersection and back.

The racers were grouped into twos and threes by the horsepower of their cars, and as many as 10 to 15 such groups participated in the midnight race from 1 a.m. to 4 a.m., according to police.

Some motor service center owners helped racers tweak the electronic control unit of their cars in order to allow extreme speeding. Police said some of them received roughly 3 million won ($2,649) per car.

Among the 73 drivers booked by police, only one was a woman.

All 73 face the charge of violating the Road Traffic Act and five have been arrested for being chief organizers of the races. Six men were found to have raced at least 100 times since May of last year.

“We always knew there were these reckless drivers on the road,” said Jeon Seon-seon, a police officer in charge of the investigation at the Seoul Metropolitan Police Agency. “But it has always been hard to catch them in the act. We began our investigation in February and have been working since then.”

The officer added that they caught one of the group’s leaders when about 100 people gathered in a parking lot on Some Sevit Island on April 15 to show off their Porsches, Mercedes-Benzes, BMWs, Ferraris, Lamborghinis and more.

They also gathered to encourage more people to participate in the races. But Jeon said that the police lacked the evidence needed to arrest them at the time.

Since then, authorities have caught groups of cars leaving Jangam Station and passing through the Songcho three-way intersection repeatedly.

“We rounded up suspects by looking into the blog sites and online communities of race participants and leaders,” Jeon said.

The five chief organizers were all engaged in an online community of foreign or luxury car owners, whose membership count ranges from 3,000 to 77,000.

The driver’s licenses of the five arrested individuals have been revoked, and 66 others have been suspended for 40 days.

Among the five arrested for organizing the races, a 38-year-old driver surnamed Park participated in 312 races since May of last year. Park got into an accident on May 17 during a race in the Sapaesan Tunnel. The BMW that he was driving hit a Mercedes-Benz, then grazed the wall of the tunnel before flipping over.