Prosecutor Jin admits he lied about money in Nexon case

Prosecutor Jin admits he lied about money in Nexon case 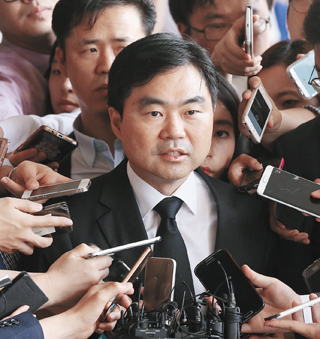 Senior prosecutor Jin Kyung-joon, summoned by prosecutors on Thursday, admitted to lying in his previous testimonies regarding the money he used to buy unlisted Nexon shares in 2005.

Chief prosecutor of the Incheon District Prosecutors’ Office, Lee Keum-ro, who has been assigned by the prosecutor general to investigate Jin, confirmed on Thursday that Jin received 425 million won ($375 million) gratis from Nexon.

Jin had initially claimed in March that he had used his own money to buy the shares, but the prosecutors’ probe exposed in June that Nexon had paid him money to buy its shares in 2005.

“Jin tried to make it appear as if he had borrowed the money by making traces of paying it back,” said a prosecution official, “but he never actually did.”

Kim Jung-ju, co-founder of Nexon and college alumni with Jin, reportedly said during his questioning by prosecutors on Wednesday that he did not lend them to Jin but had given them to him.

Jin submitted a written confession on Wednesday confirming that.

“I apologize for not coming forward earlier,” Jin told reporters before heading into the Seoul Central District Prosecutors’ Office on Thursday.

“I have submitted my confession and I will tell the prosecutors everything.”

With Jin’s confession that he had indeed bought Nexon shares in 2005 with money he received from Nexon, this means that Jin made nearly 12 billion won from stock trades that he made no investments in.

Since the 10-year statute of limitations on possible bribery cases for the 425 million won Jin received from Kim in 2005 ended last year, the prosecutors will be focusing their investigations on the 575 million won profit Jin made from his 2006 trade, and another 11 billion won profit he made in his 2015 trade.

“If Jin knew, when he bought the Nexon Japan shares in 2006, that the stocks would be registered in the Japanese market later,” said a prosecution official, “then he faces charges of accepting bribes and insider trading.”

In 2011, Nexon stocks were registered on the Japanese stock market and the number of shares expanded due to a stock split.

Jin was summoned on the eighth day after the prosecutor general assigned Lee Keum-ro to the probe.

The prosecution raided and seized documents and hard drives from the residences of Jin and Kim and the offices of Nexon and NXC Corporation, the parent company of Nexon, on Tuesday. Prosecutors then summoned and questioned Kim on Wednesday.

Jin faces a separate corruption charge for a case in which he allegedly doled out a favorable handling in a case involving tax evasion by the owners of the Hanjin Group who, in return, allegedly helped his brother-in-law’s company sign deals with Korean Air, which is owned by the Hanjin Group.