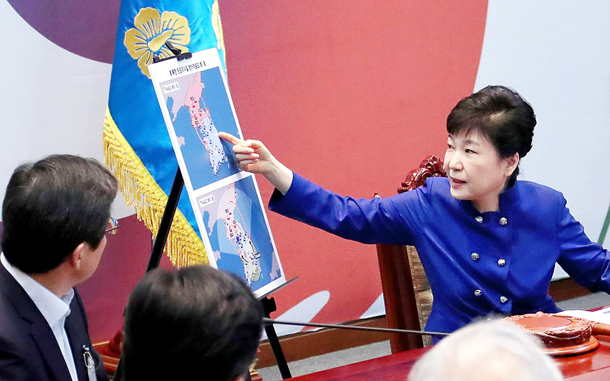 After the South Korean government allowed U.S. Forces Korea to deploy the Terminal High Altitude Area Defense (Thaad) system, China showed rough and violent responses over the past week. We must stop Beijing’s rude attitude. “We believe that the deployment of the Thaad battery goes far beyond the defense need of the Korean Peninsula. Any justification to this cannot hold water. We have every reason and right to question the real scheme behind this action,” Chinese Foreign Minister Wang Yi said.

A few days ago, Chinese Foreign Ministry spokesman Lu Kang said, “China strongly urges the United States and South Korea to halt the process.” This has gone too far. Why does China intervene in a foreign government’s action on its own territory?

As of now, China deployed mid- and short-range missiles in three bases near the Korean Peninsula. They are located in Tonghua of Jilin Province, Laiwu of Shandong Province, and Dalian of Liaoning Province. The missiles have ranges from 600 to 1,800 kilometers (373 and 1,118 miles), according to Lee Choon-geun, senior researcher of the Korea Institute for Maritime Strategy.

The entire South Korean territory is under their radar and missile ranges. If Seoul demands the bases be relocated away from South Korea, will Beijing accept it?

China will surely dismiss the demand as an intervention in domestic affairs.

While China has many spears, Korea is preparing just one shield, but China is trying to take it away. Confucius said one must not ask others to do something that they don’t want to do. That is the minimum conscience of a human society. It has no right to make a preposterous demand just because it is a larger country.

It is unfortunate that some South Korean politicians are fearful of China are or trying to please it because it is a superpower. What changes the decision of a superpower is the firm attitude of a small country.

Switzerland and Israel, with less than 10 million people each, do not feel small before any superpowers.

The messages they each posted on their Facebook pages show who has the broader perspective as leader. Nam talked about three principles. First, the Thaad deployment is a matter of sovereignty, he said, and second, it is to defend the Korean Peninsula. Third, its fate must end when the North Korean nuclear crisis ends, he said.

This is the most concise and appealing message on the Thaad deployment. And the three principles must be explained to China repeatedly and earnestly. Particularly, the South Korean government and the U.S. military must agree on the third point and announce it jointly.

Although the Thaad system belongs to the U.S. Forces Korea, it won’t stay in the South forever. It will be withdrawn when the North’s nuclear weapons program end.

This is key to resolving China’s doubt that Thaad is actually the U.S. missile defense network against it.

Although Chinese leaders, who value honor and justifications highly, may not accept the explanation immediately, it is necessary to talk to them persistently through various channels.

Meanwhile, Moon listed three wrongs of the government in his message. He said the decision to accept the Thaad deployment puts the cart before the horse. He also said it was a high-handed decision and a half-baked measure.

These are subjective views that employ the same old language, rather than focusing on facts. He argues that the cart is Thaad, while the horse is the North’s nuclear program, and the Thaad deployment will make it difficult to resolve the nuclear crisis.

But the North’s nuclear dismantlement will be achieved through political and strategic bargaining between Pyongyang and Washington. A tactical, operational issue such as the Thaad deployment has nothing to do with nuclear dismantlement. It is erroneous to link these different issues.