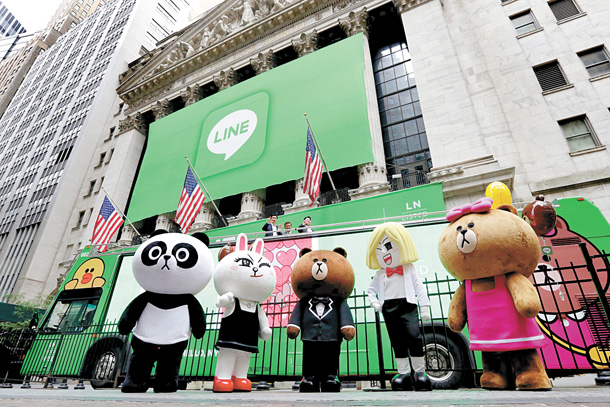 The value of Line Corporation, a Tokyo-based messaging app subsidiary of Korean portal site Naver, has amounted to an estimated 10 trillion won ($8.8 billion) after a successful debut Thursday and Friday on the New York and Tokyo stock exchanges that took even market experts by surprise.

Not only is this the first Korean company to make a dual listing, it is also the largest tech initial public offering (IPO) of the year. Line shares closed at 4,245 yen ($40), 32 percent higher than the IPO price of 3,300 yen per share, on the Tokyo market Friday.

Line is the seventh-most popular chat app in the world, with 215 million monthly users. It is available in 230 countries in 19 languages, with two-thirds of its users concentrated in four Asian markets: Japan, Taiwan, Thailand and Indonesia.

There was great interest in Line’s IPO even before the Tokyo market opened on Friday. In fact, because of the surge in orders for the company’s stocks, trading was held in Japan for almost an hour and a half before resuming at around 10:35 a.m. As soon as the stocks went public, the price surged 48 percent to 4,900 yen, and in less than 10 minutes, it jumped as high as 51.5 percent to 5,000 yen.

“The market capitalization is near 10 trillion won, which is about the amount that was expected,” Oh Dong-hwan, an analyst at Samsung Securities, said.

Other analysts, though, were surprised by the amount of hype.

“I didn’t expect it to be this successful, since the internet-related market is very hard to predict due to its volatility,” said Kim Chang-kwan, an analyst at Mirae Asset.

Kim said the market valuation will likely amount to around 12.6 trillion won when adding the currency difference between the yen and won.

It is likely that Line will continue to enjoy hefty revenue. The company currently leads major markets in several Asian countries, including in Japan, where there are 68 million users. In Korea, though, the app has only 16 million users, since rival Kakao still dominates with its messaging app.

“It appears that global investors thought highly of Line’s potential for further growth. Line and Naver will continue to be good choices for investment,” said Oh of Samsung Securities. “In addition to Line’s IPO, a strong Japanese yen against the Korean won will help the company’s profit and value. The company’s profit is growing rapidly, and investors are really interested in the mobile-related market.”