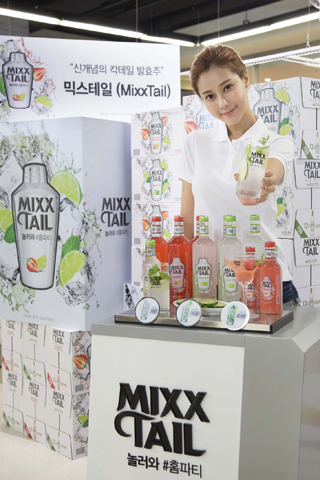 A model presents Oriental Brewery’s newly-launched cocktail drink MixxTail at a large retail store in Korea on Friday. The company said it is hosting tasting events at major retailers across the nation through August. MixxTail was first introduced at the end of June, and the company says it is a “fermented” cocktail drink. As part of its promotion, Oriental Brewery opened a three-floor pop-up store in Garosu-gil, southern Seoul, on June 30 where visitors can try out the latest cocktail drink while also enjoying an outdoor garden, a game and puzzle zone and a DJ booth. The pop-up store, which is open from 11:30 a.m. to 10 p.m., will run until July 29. [ORIENTAL BREWERY]