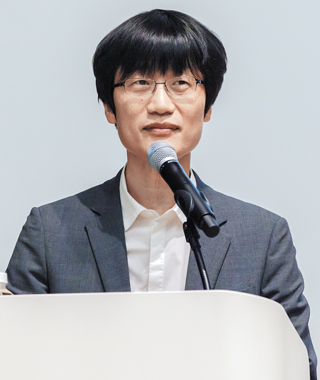 CHUNCHEON, Gangwon - Proceeds from the latest public listing of popular messaging app Line will be used to acquire promising start-ups with strong technology and expand its market presence beyond its traditional footholds in Asia, Lee Hae-jin, chairman of Korean portal giant Naver, Line’s parent company, said in a rare press conference on Friday.

On the day the chat app made a splash on the stock exchanges of New York and Tokyo, the reclusive founder and chairman invited reporters to Naver’s data center in Chuncheon, Gangwon, laying out plans related to the initial public offering (IPO) and future vision of both companies.

Lee suggested that the large capital size and expansion strategies of other global tech companies prompted Line to go public.

“When we look at competing apps such as WhatsApp and WeChat, the size of investment and money handled by them and owning companies like Facebook are on a whole different scale compared to us,” the 49-year-old chairman said.

“The gap led us to decide on the IPO to raise the capital needed to compete with the tech giants.”

Lee said the raised funds will go toward strengthening Line’s position in Asia and establishing a stronger foothold in the United States and European countries, regions where Line has struggled to gain momentum.

“It is important to maintain our strength in target markets including Japan, Thailand and Indonesia,” he said. “We are going to look at what kind of new businesses we can offer in those countries.

“But we will also come up with a new approach for the North American and European regions.”

Lee said Line’s choice to dually list on both the Tokyo and New York stock exchanges reflected their expansion strategy.

“In the case of Japan, it is our biggest market, where the largest chunk of sales are generated,” he said.

“The New York trading debut can enhance our brand recognition on the global stage when we are on the lookout for mergers and acquisitions and equity swaps.”

Although the app is available in more than 230 countries, Japanese users account for 27 percent of Line’s monthly active users.

The $1.1 billion IPO, the largest tech trading debut this year, will also give Line room to snap up promising start-ups, scale up business and carve out new niches, the founder said.

Lee made clear that Naver and Line were keen on acquiring companies with already sound technology.

Line had delayed its public offering several times after it first filed an application to list in Tokyo in July 2014, which could have valued the company at 1 trillion yen ($9.2 billion), according to Bloomberg.

Some analysts said the delay led to a reduced valuation this time around.

But Lee countered the view, saying that now is the right time for Line to ensure fair gains for investors.

“Some say that Line could reap more money if we debuted earlier,” the chairman said, “But I don’t think so because the assessment could differ how we look at the IPO.

“We planned on the IPO three to four years ago. But at the time, the messaging app market had just started to take hold, and Line doesn’t have a sound business model to ensure a constant revenue stream,” he said,

“But now we have much to explain to investors about our strategy and profit generation, so I think now is the right moment.”

Lee also briefly responded to controversy surrounding Google’s request to the government to ease regulations related to the collection of map data. Korea prohibits companies from exporting government-supplied map data for security reasons, a rule that Google says limits some functions of the company’s map service.

“I think if a company is to operate in a certain country, it should follow the rules in that country,” Lee said.