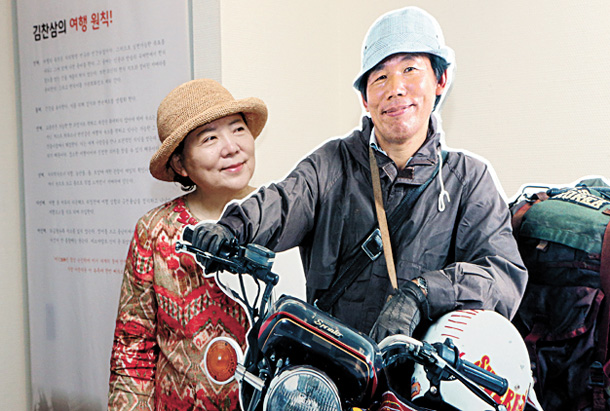 During the 1960s and 1970s it was all but impossible for Koreans to leave the country. One man, however, circled the globe and later published the story of his travels, giving the rest of the nation a glimpse of the world at large.

“Like a pale cloud climbing up a purple mountain,” one passage reads, “the Don Quixote of our time drifts toward the end of the earth.”

This is from “The Penniless Traveler: A Record (1962),” Korea’s first travel book. In another section, it reads, “Foreign nations give off a beautiful and warm sort of affection. I’m stranger wandering around these wildernesses.”

Kim San-cham, the author of the book, traveled the world for over 14 years, covering a total distance equal to going around the world 32 times. 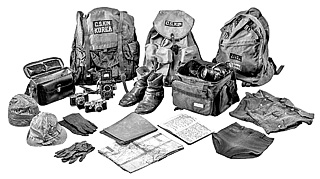 Some of the equipment Kim Chan-sam took on his trips. [CHOI JEONG-DONG]

Kim died in 2003 and his bags, cameras, clothes and diaries are now being displayed in Hanyang University Museum, Seongdong District, eastern Seoul. This is the first time his belongings have been shown to the public.

“My father loved traveling,” said Kim Eul-la, 69, his eldest daughter. “He would even tell his traveling mates that if he died on the road, to lift up his coffin so he could see the surroundings instead of staring blankly at the sky.”

Her eyes glimmered with tears as she stared at her deceased father’s belongings. Kim lives in the United States now but has temporarily come to Korea for the exhibition.

Her father went on his first trip in 1958, when his eldest daughter was in the fifth grade.

“The entire family was against it,” his daughter said. “The disagreement wasn’t surprising given that my grandfather was a Supreme Court Justice at the time.

This was also during a time when people thought traveling around the world was something like a death sentence.

“But my father persuaded the family by telling them that he couldn’t just sit around reading books and teaching outdated knowledge.”

“I spent my childhood almost without a father,” she said. “I barely spent time with him because he was busy traveling. Even after he came back from his trips, he was occupied with writing and going to universities to lecture.”

“Since my father brought back heaps of photos and documents from his trips,” recalled Kim’s daughter, “he was often suspected as being a spy and was frequently questioned at Gimpo airport for hours.”

She also shared some of her father’s exclusive traveling tips.

“My father told me to look at the place I’m visiting from three different perspectives. To first look at it before sunset, while the sun is shining bright and when the sun is going down.”

She added, “When my father was traveling by car he would never turn on the air conditioner, saying that he had to interact with the natural wind of the place.”

Despite having one of Korea’s most renowned travelers as a father, Kim barely remembers traveling with him. So to make up for this she takes a trip every year on the anniversary of his death. In June, she traveled to China with some of his old travel mates.

“When I was young I thought of him as an unsophisticated person,” she said. “But after reading my father’s travel records, I realized the true meaning behind traveling.”

She also described her future goal, saying, “I want to build a traveling school that teaches basic manners that one must possess when going abroad.”

The exhibition, Homo Viens, will be displaying the late Kim’s belongings until Aug 27.