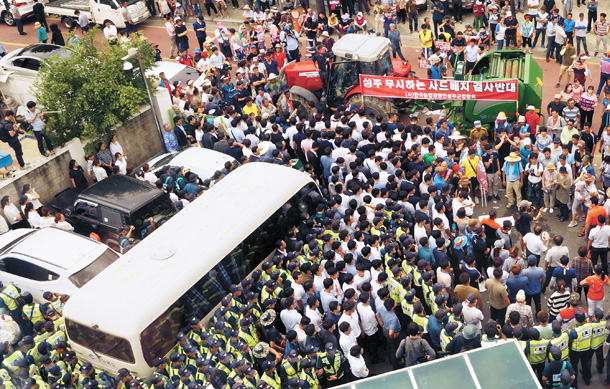 Prime Minister Hwang Kyo-ahn, Minister of National Defense Han Min-koo and other government officials are trapped in a bus in Seongju County, North Gyeongsang, on Friday as an angry mob of residents protest the deployment of the Thaad system in their hometown. Hwang was also pelted with eggs and doused with water. [NEWSIS]

An angry mob of Seongju residents besieged the prime minister for more than six hours on Friday during his visit to the southeastern rural town to explain the government’s recent decision to place a controversial U.S.-led missile defense system in their neighborhood.

Prime Minister Hwang Kyo-ahn, accompanied by Minister of National Defense Han Min-koo and Vice Minister of Interior Kim Sung-lyul, traveled to Seongju, North Gyeongsang, in the morning to meet with residents after Seongsan-ri of Seongju, a village with about 2,800 people, was selected Wednesday as the site to host the U.S. Forces Korea’s Terminal High Altitude Area Defense (Thaad) system.

After arriving in Seongju by a helicopter, they met with North Gyeongsang Governor Kim Kwan-yong and visited the artillery base in Seongsan-ri. A Korean Air Force artillery unit currently stationed there will be relocated and the U.S. military will install the Thaad system by the end of next year.

Hwang then arrived at the Seongju County Office and met with Kim Hang-gon, head of the county, who has been on a hunger strike in protest. About 3,000 angry residents were waiting for Hwang and pelted him with eggs and poured water on him.

The quiet farming town of Seongju, with a population of about 45,000, has become extremely volatile since residents fear the deployment for security and health concerns. North Korea warned of a physical response to the Thaad base, while concerns were also raised that the electromagnetic waves emitted from the Thaad radar are harmful to humans. The government said the radar poses no harm to humans outside of its 100-meter (328-foot) radius.

After meeting with Kim, Hwang tried to address the public to make an appeal.

“Because the country’s safety was threatened and the people’s lives were in danger, the government had to make a preparation,” Hwang said, repeating the Park Geun-hye administration’s explanation that the missile defense system is to deter the North’s nuclear and missile threats. “I apologize once again to the residents that we failed to properly consult with you in advance.”

While Hwang was speaking, residents shouted insults. They also yelled that they will not allow the Thaad deployment at any cost and threw eggs and water bottles at Hwang.

After Hwang finished his remarks, Kim took the stand and demanded that the Park administration recant its decision to deploy the system in their region. “Why does the government demand a sacrifice of Seongju residents?” he asked.

Defense Minister Han also tried to convince the angry crowds by saying that Seongju was the best site for military strategy. He also assured them that the military will scientifically prove that the radar is not a health hazard.

As the angry mob rushed toward Hwang and the government officials, scuffles took place with their bodyguards. Hwang and his entourage took refugee inside the county office and protestors attempted to enter the building. After the chaos, Hwang and government officials boarded a mini bus around 11:30 a.m. to leave the county office compound, but crowds surrounded the bus. They also brought two farming tractors and blocked the passageway leaving the compound. The prime minister and his entourage, including the defense minister, were trapped inside the bus, besieged by the mob for six hours and 30 minutes.

The poll was a random telephone survey. It had a 3.1 percentage-point of margin of error and a 95 percent confidence level.