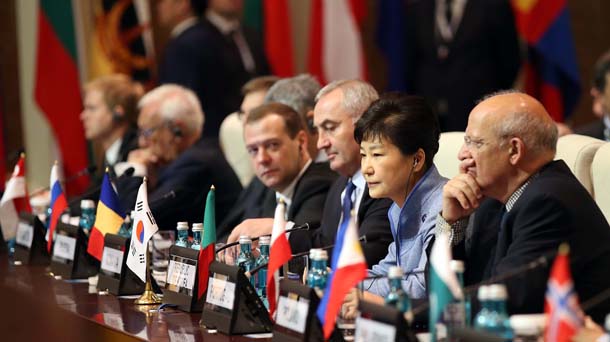 President Park Geun-hye attends the opening session of the Asia-Europe Meeting summit in Ulaanbaatar, Mongolia, on Friday, alongside other world leaders. [AP/NEWSIS]

President Park Geun-hye proposed on Friday that a conference of economic ministers from Asian and European countries be held in South Korea next year to promote free trade.

Park made the proposal at the Asia-Europe Meeting (ASEM) summit in Ulaanbaatar, the capital city of Mongolia, when she made remarks as a lead speaker of the two-day summit’s first session.

The summit brought together the leaders of some 50 countries from Asia and Europe including Japan, China and Russia.

“I hope this ASEM summit will create momentum to spread free trade, inclusive growth and creative innovation in the region,” she said. “In order to discuss more specific action plans, I propose that an economic ministerial meeting of the ASEM be held in South Korea next year.”

If the ASEM member countries accept her proposal, the long-stalled economic ministerial talks of the Asian and European countries will resume after 13 years.

Since 1997, economic ministers of the ASEM countries have held annual conferences. The last meeting took place in China in July 2003. No meeting, however, took place since then due to the ASEM member countries’ spat over human rights issues in Myanmar.

“Uncertainties are growing in the global economy, but we must not forget the historical lesson that growth has come in tandem with the spread of free trade,” Park said, stressing that the ASEM summit should provide the driving force behind free trade and inclusive growth.

She also warned against growing trade protectionism and isolationism, as seen with Britain’s recent decision to leave the European Union.

Park also asked the ASEM members to cooperate to resolve continuing challenges to peace and the stability of the global community, such as North Korea’s nuclear threats.

On the sidelines of the multilateral summit, Park held bilateral meetings with the leaders of the European Union, Laos and Vietnam on Friday. The talks focused on strengthening international support to end the North’s nuclear arms program and discuss economic issues.

In her meeting with European Commission President Jean-Claude Juncker and European Council President Donald Tusk, the leaders reaffirmed their cooperation on the North Korea issue and strengthened their strategic partnership.