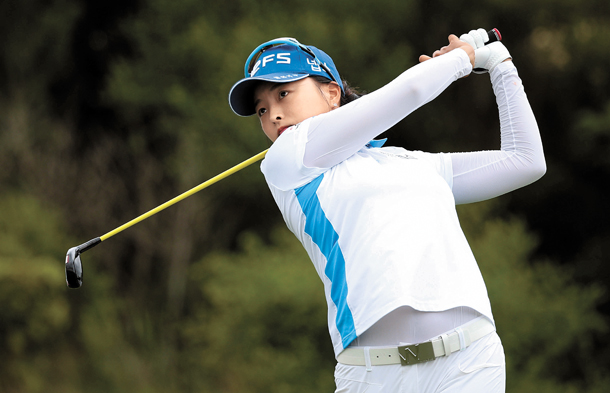 Ko Jin-young tees off during the final round of the BMW Ladies Championship 2016 on Sunday. Ko shot 13-under to grab a wire-to-wire victory at this year’s BMW Championship. Pocketing 300 million won (263,439 dollar) from her second win of the season, Ko is now ranked second in the KLPGA Money List. [KLPGA]

Ko Jin-young clinched her second title this season and sixth overall at the KLPGA by taking the trophy of the BMW Ladies Championship 2016 on Sunday. Ko shot 13-under to win the event, two strokes ahead of the runner-up Jung Hee-won.

Played at Sky 72 Golf and Resort in Incheon, the BMW Ladies Championship was in its second year this year and boasted a prize pot of 1.2 billion won ($1.05 million), almost twice as much as a regular KLPGA tour event.

This made the stakes higher than ever for the 144 KLPGA golfers and competition from the first day on Thursday was fierce. However, the 21-year-old Ko maintained her position at the top of the leaderboard to grab her second wire-to-wire win of the season. After carding eight birdies in the first round, she shot 7-under on the first day. She went 4-under the second day and even on the third day to go into the fourth round as an overnight leader.

Starting out the last day of the tournament at 11-under, Ko kept herself in the lead earlier in the round, nabbing two birdies in the first five holes. However, Ko allowed the overnight runner-up Lee Min-young to match her in the leaderboard when she bogeyed the seventh hole. Lee, who claimed a comeback win from the Kumhotire Ladies Open during the first week of July, was determined to repeat the feat and take the trophy from Ko in the final round. She took three birdies in the first half of the fourth round. Despite the comeback attempt by Lee, Ko, whose strong mentality is often cited as her secret weapon, was unfazed.

The par-3 12th hole was the deal breaker that decided the event. While Lee came out with a bogey, Ko parred the hole to take up the lead once more. It was a part of her parring spree as she shot even from the 8th to 16th hole.

Then came the 17th hole, where Ko nailed down her win. One stroke ahead of the runners-up Lee and Jung, Ko landed her second approach shot right by the pin, making a birdie chance that would extend the lead by two strokes. Ko, who is ranked 33rd in the world as of Sunday, wasn’t going to let the chance slip by as she calmly pushed her birdie putt into the hole. With the gallery going wild behind her, it was apparent that Ko had essentially secured her win from the tournament.

Ko was third in the KLPGA Money List before Sunday, taking home 339 million and 718,666 won this season. After Sunday’s win, Ko added 300 million to her pocket out of the 1.2 billion won pot and climbed up to second in the Money List after Park Sung-hyun. Park, who withdrew from the event citing her physical condition, leads the Money List after accumulating 706 million won.

Ko initially garnered global stardom in golf when she finished runner-up at the British Open last year after her compatriot Park In-bee. She obtained an invitation to this year’s U.S. Women’s Open, which took place from July 8 to July 11, but was unable to attend the most prestigious event in women’s golf. As the defending champion of the ChoJung Sparkling Water Yongpyong Resort Open, which overlapped with U.S. Women’s Open, she would have had to pay a penalty imposed by the KLPGA.

The Korean women’s golf body has a regulation, also known as the “Defending Champion” rule, which stipulates that a golfer who is the defending champion of an event must attend the tournament the subsequent year or else must repay all the prize money they received. Ko didn’t make the cut during this year’s ChoJung Sparkling Water Yongpyong Resort Open.

During the winner’s interview afterwards Ko said, “I didn’t sleep so well last night and I got up at five in the morning. I was very nervous. But I tried to relax and I think I did well.”

“I saw the right side of the pin but I got lucky and my shot went right near the hole,” answered Ko when asked about her decisive birdie at the 17th hole.