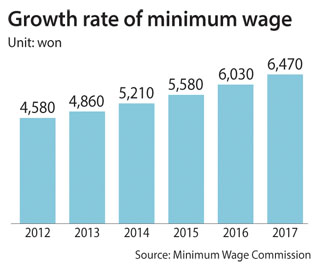 The decision to raise the hourly minimum wage for next year by more than 7 percent did not sit well with either the labor union or Korean businesses.

The labor representatives wanted the minimum wage to be raised to 10,000 won ($8.78) while Korean businesses argued that the subsequent higher labor costs will burden companies, particularly small and midsize operations, which are already struggling under the current economic conditions.

The Minimum Wage Commission operates under the Ministry of Employment and Labor and consists of three parties: labor, employers and the government. On Saturday the commission announced that next year the hourly minimum wage will be raised 7.3 percent to 6,470 won. This is the second sharpest hike since last year, when the minimum wage was raised 8.1 percent.

The total number of employees subject to the minimum wage standard is 3.36 million, accounting for 17.4 percent of the country’s total workforce, according to data by the ministry.

With the decision, individuals who work 209 hours a month on minimum wage will now receive 1.35 million won. That’s 91,960 won more than what the same employee now receives every month.

Employers that failed to pay employees salaries in compliance with the minimum level face a maximum jail time of three years or a maximum fine of 20 million won.

The decision, which passed its initial deadline three weeks ago on June 28, was made in haste, as the government forced the voting on Saturday afternoon while labor representatives left the meeting in protest.

After the commission voted in favor of the 7-percent raise, the largest labor group, the Federation of Korean Trade Unions, immediately denounced the plan saying that the government is ignoring the desperation of workers and that it will go on a massive protest against the plan.

“Announcing the employers’ demand as the final version is no different from staging a coup in the middle of night,” said the federation in a statement. “It’s a violent decision that cannot be accepted.”

The federation will convene a meeting Tuesday to discuss protests for the second half of the year.

On the other end of the aisle, the business representative, the Korean Employers Federation, expressed their own discontent by saying small businesses are expected to endure the increased burden amid the current economic slowdown.

“Despite the tough economic conditions, a wage rise over 7 percent has been made,” the federation said. “Small businesses hiring less than 30 people would have to pay an additional 2.5 trillion won annually to cover the cost.”

The employer side of the commission claims that they couldn’t disagree with the plan because of the government’s coercion, the association said.

The Korea Federation of SMEs in its own press release on Sunday expressed their disappointment, stressing that the decision was made without regarding the practical abilities of small and midsize businesses and small private entrepreneurs like restaurant owners to pay their employees.

“We are concerned that SMEs [owners] and small private businesses will be labeled criminals because of their inability to pay employees,” the press release stated.

The new wage standard will be reviewed and revised over the next 20 days. The Employment Minister will announce the final version on Aug. 5.