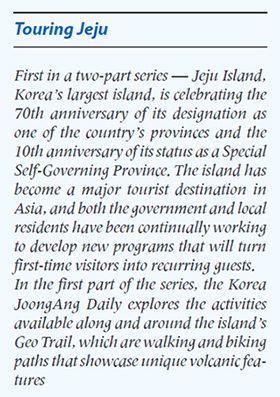 SEOGWIPO, Jeju Island - Everyone in Korea knows Jeju Island as a popular vacation spot, but fewer are aware it was created by volcanic eruptions.

Once you know what to look for, however, it becomes obvious - the island’s volcanic past means it has dozens of unique geographic features.

The entire island was designated a Unesco Global Geopark in 2010, and the regional government has since been working on new programs to illustrate the ways in which Jeju has been shaped by lava and fire.

Most recently, it opened the Geo Trail in 2014. Unlike the popular Olle Trail, which passes through the island’s small towns and gives a glimpse of daily life, the new paths lead visitors to Jeju’s most unique volcanic features.

Geo Trail consists of three routes: one around Sunrise Peak (also called Seongsan Ilchulbong), another near Mt. Sanbang and the last through the Woljeong-ri area.

Each route has different activities available on or around it.

Sunrise Peak offers the chance to go scuba diving and see traces of volcanic activity underwater, the Mt. Sanbang trail can be ridden by bike and the Woljeong-ri trail leads to a cave over 7.4 kilometers (4.6 miles) long. 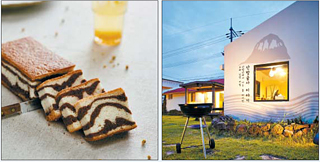 Left is a sponge cake made similar to the shapes of volcanic stratum, and right is a Geo House near Mt. Sanbang. [JEJU TOURISM ORGANIZATION]

Sunrise Peak, an island off Jeju’s coast that’s now connected after years of sediment buildup, has long been popular with visitors. It offers spectacular views and, unlike rugged Mt. Halla, it can be climbed in just 30 minutes.

But those with a sense of adventure should head down rather than up, as some of the island’s most unique features can only be seen underwater.

Local dive shops near the Geo Trail organize many trips to spots just off the island’s coasts, where the currents are easy enough for even novice divers.

On the ocean floor - about five to seven meters (16.4 to 22 feet) deep - divers can see millions of tiny black pebbles made from lava crushed over time.

Even though that’s not very deep, there are still plenty of sea creatures to be seen. Schools of fish both large and small swim by, and sea urchins can be found in cracks.

Many dive instructors will take photos and videos of people underwater to give them mementos to take home.

Dives farther out to sea are also available for those with more experience.

Many trails on Jeju can only be walked, as they take hikers from beaches into the mountains, but the Mt. Sanbang route is flat enough to be enjoyed on a bike.

There are different ways to go depending on how ambitious visitors feel, but biking cuts the ordinarily four-hour walk in half.

The trail begins near Yongmeori Beach, which is named for its stratum of volcanic rock that resembles the head of a dragon. (In Korean, Yong means dragon and meori means head).

There’s a bike rental shop nearby, and while the proprietor isn’t always around, visitors can call a number on the door to get help.

The trail begins along the water, and then heads past farms where locals can be seen working. Mt. Sanbang, one of Jeju’s most scenic mountains, remains visible for most of the ride.

The roads are well-paved and clearly marked, so even in rainy weather, riders won’t have to worry about slipping or getting lost.

There are many cafes and restaurants nearby where riders can take a rest while appreciating views of the mountains and ocean.

In addition to the trails, the regional government is also designating certain hotels and guesthouses nearby as “Geo” locations.

Geo Houses are places where visitors can spend the night while learning about where to hike or get a good picture.

The regional government is currently in the process of designating more spots as Geo Houses.

Through July 20, it will accept applications from guesthouses located in the 16 neighborhoods connected to the trails.

Those chosen will be given help with things like improving facilities and amenities, allowing them to become more appealing for travelers. The spots will also be widely promoted to bring in more business.

The owners of various Geo Houses say the initiative will benefit even those who don’t know about the island’s unique geography.

“Even if customers book somewhere they didn’t know was a Geo House, they’ll get a chance to learn even more about the island,” said the operator of Hoclack 80, a guesthouse near the Mt. Sanbang trail. “Maybe they’ll even walk one of the trails as a result.”

There is no comprehensive reservation system for Geo Houses because they all are individually run, so those interested should call each directly.

To get more information about the Geo Trails and activities both on and off, go to www.ijto.or.kr or go to www.jejugeopark.com. 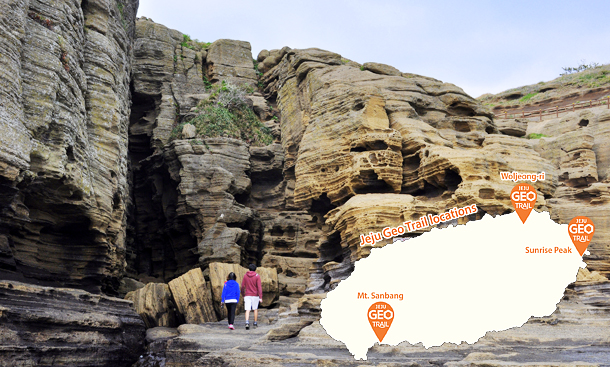 Hikers walk at Yongmeori Beach, a stratum created due to volcanic activity on Jeju Island. The beach marks the beginning of the Mt. Sanbang section of the island’s Geo Trail, which takes visitors to various volcanic features around the island. [JEJU TOURISM ORGANIZATION]