[Venture Abroad] Connecting the dots for the visually impaired

[Venture Abroad] Connecting the dots for the visually impaired 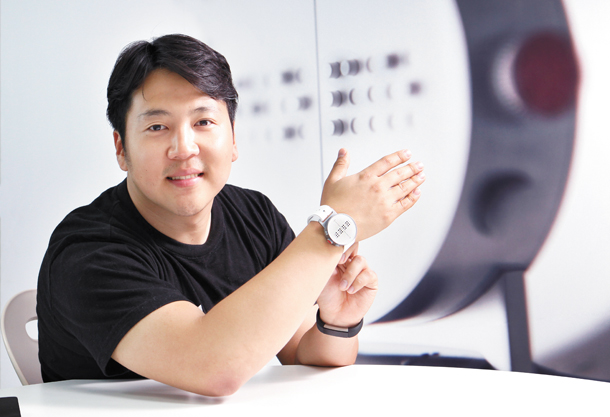 In 2013, Eric Ju Yoon Kim was stuck in a rut. An entrepreneurship student at the University of Washington, Kim often took semesters off to start his own businesses. Three times, he opened up shop, and three times, he closed them down, unsure if he was finding value in the work.

“My third business, sort of an Uber for trucks, did quite well,” Kim said. “But I knew this wasn’t really what I wanted to do with my life.”

One question from Steve Jobs’ iconic 2005 Stanford commencement speech kept playing in his head: what would you do if you were to die tomorrow?

Kim found his answer one day at church, when he saw a girl carrying a thick and bulky Braille Bible.

“That’s when I first heard about the life of a blind person,” he said. “The simple Bible was translated into 22 huge Braille books, and they [blind people] also have to carry around a heavy device around their necks, which I found out later was a Braille reader.”

So Kim started another business, Dot, in April 2015, and with two of his friends, they created the world’s first Braille smart watch.

“I thought the chances were good simply because the problem was very clear,” the entrepreneur said.

According to World Health Organization data from 2014, the most recent available, there are 285 million visually impaired people, almost 4 percent of the world’s population.

But a bigger problem is that more than 90 percent of these people cannot read Braille, according to figures from Dot. The tactile writing system’s rare use has resulted in only 1 percent of general books being translated into Braille.

“That’s why we are entering the market with a smart watch that is cheap and easy to get,” Kim said.

The Dot Watch, the start-up’s first product, costs $290 before taxes and weighs only 73 grams (2.6 ounces). Existing Braille devices weigh over 2 kilograms and cost over $2,000.

Such downsizing is possible through a piece of technology called a multi-actuator, which is cheaper and more durable than Piezo technology currently used for Braille products.

“Piezo cells are made with ceramic, which makes them susceptible to damage,” said Choi Ah-rum, a marketing director at Dot. “But we replaced the cells with actuators that are wrapped with a magnetic coil and scaled down in both price and cost.” 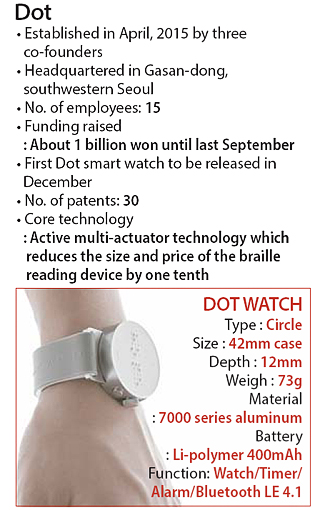 The watch is capable of simple tasks such as telling time, setting alarms and displaying text. Twenty-four dots grouped in cells of four on the watch’s surface rise and fall to display different text, and the device can work in connection with smartphones via Bluetooth. It can last at least five days on one charge.

“Some people misunderstand our vision as replacing current Braille reading devices,” Kim said. “But this watch can’t replace the functions of a top-notch Braille reader, nor did we design it to do so.”

Although heavy and costly, Braille readers incorporate diverse functions almost similar to a computer. The devices can display Braille, record voices and make possible the use of internet and social networking services such as Twitter and Dropbox.

“The watch can only display four characters at a time, and it’s far too difficult to read a book, though it is possible with the watch,” Kim said. “Nonetheless, this simple watch can give blind and the non-blind a chance to explore a cool new option for the blind and offer chances for blind people to actually learn Braille.”

The so-called refreshable Braille display market has barely changed in the last 20 years. Now, the team is putting full effort into keeping prices low and securing distribution channels so that anyone can afford Braille devices.

There are already over 100,000 preorders for the Dot Watch, making potential sales revenue 35 billion won ($31 million). Customers on the waiting list include high-profile Italian tenor Andrea Bocelli, who lost his eyesight when he was 12, and another world-class singer-songwriter, Stevland Hardaway Morris, better known as Stevie Wonder.

Dot has already made headlines across the globe, appearing in features by Time Magazine and the BBC. The start-up has won awards in a number of contests including “The Golden Pentagon Season 2,” a KBS2 television program in Korea. The award granted them enough money to afford their current office space in Geumcheon District, southern Seoul.

Their latest in a string of awards include two from the Cannes Lions 2016 international advertisement festival held last month. It was appraised in two categories, product design and innovation, becoming the first Korean company to be on the list of winners.

Kim hopes Dot can take their devices to the next level. Already, the start-up is at work creating a mock-up of the Dot Pad, a follow-up to the Dot Watch designed to potentially supplant existing Braille readers. 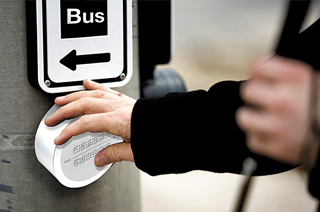 A prototype of the start-up’s refreshable Braille display to be used at bus stops for its Dot Public project.[PARK SANG-MOON]

The team hopes to launch the product by around 2018 or 2019. The device looks just like any other tablet, except the screen is filled with refreshable Braille. While such a product has appeared in the past as a concept, none have ever actually been commercialized to be sold in the market.

The Dot Pad’s most powerful feature allows the blind to learn algebra and shapes through multiple lines of display, instead of just a single-line display that many existing Braille readers offer. The start-up is currently working with Kwong Dong-soo, a professor at the Korea Advanced Institute of Science and Technology, on technology for the Dot Pad.

The team is also dreaming big with Dot Public, a project to implement its multi-actuator Braille display technology in public areas like ATMs, buses and subways. Dot’s first project could be in Saudi Arabia, where a new subway station is being built and where refreshable Braille might be installed on electronic signboards. The start-up is currently in business talks with the country, so details and confirmation of contract are yet to come.

Still, difficulties lie ahead for Dot, since the company is still a bit of a ways from actual production and commercialization.

“For a start-up selling hardware like us, it is important to endure the first cycle, from manufacturing to after-sale service,” Kim said. “We have recently opened up another round of crowd funding to raise an additional 5 billion won to prepare for production to take place in the latter half of the year.”

The Dot Watch is currently scheduled to launch on Dec. 25.

“Dot is one of the start-ups with a very clear vision, and its marketing and promotions have reached a sufficient level,” said a spokesperson from Demoday, a Korean start-up portal service provider. “Now, the key to its success lies in its sales.”

In the meantime, the start-up is expanding its business to diverse sectors, including teaching Braille in third-world countries. It has teamed up with the Korea International Cooperation Agency to provide low-cost modules for blind children in Nairobi, Kenya, and teach them Braille.

It is also cooperating with Google to apply refreshable Braille on its Chromebook and in talks with telecommunications provider KT to provide Braille signage for participants in the 2018 PyeongChang Winter Paralympics.