Once lost, ancient woodblocks get recreated

Once lost, ancient woodblocks get recreated

For those interested in the eventful part of Korean history known as the Three Kingdoms Period (57 B.C. to 668 A.D.), there are two main texts.

For instance, Samgukyusa, written by a monk named Ilyeon (1206-89), contains 14 Silla poems popular among the common people, known as hyangga. They provide an important glimpse into how average Koreans lived. 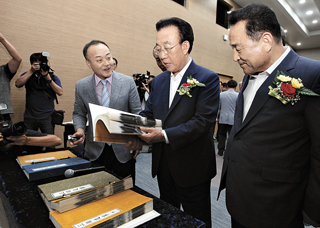 (The three kingdoms were Goguryeo, known for its military prowess; Baekje, for its arts and crafts; and Silla for later striking a controversial deal with China’s Tang Dynasty to unify with Goguryeo and Baekje.)

Samgukyusa was printed using woodblocks. Today, several versions of the book exist, with one version named National Treasure No. 306.

While the original woodblocks are nowhere to be found, they have recently been recreated.

Korea’s regional governments and the Advanced Center for Korean Studies announced the development earlier this month. It is the culmination of work that began in March 2014.

The recreation of the woodblocks is based on the version of Samgukyusa printed in 1512 by Yi Gye-bok. There are a total 115 woodblocks that feature 89,200 individually carved letters.

“Reconstruction of the woodblocks used for Samgukyusa was important, as our culture of record-keeping is something we inherited from our ancestors,” said Gov. Kim Kwan-yong of North Gyeongsang Province at a press event on July 8.

Each letter measures 14 millimeters (0.5 inch) by 14 millimeters. One line of text, which is written vertically as with most ancient Korean, consists of about 21 letters. Carving each line usually took about two hours.

“My goal every day was to carve five lines, or 105 letters,” said Park Ung-seo, one of the seven artisans who took part in the project. “But that takes a lot of concentration.”

After each woodblock was completed, it was examined by an inspector. Just one wrong letter was allowed per block, which would be carved out and replaced with the correct one.

If there were more than two wrong letters, the entire block was thrown away and the artisan had to redo it.

Regional governments have also been using the woodblock-making process to boost tourism. They opened the artisans’ workshop, in Gunwi County, North Gyeongsang, to the public. Through the glass, people could see artisans working on woodblocks.

The regional governments and the Advanced Center for Korean Studies actually printed new copies using the recreated woodblocks. These have been distributed to various research institutions including the National Library of Korea.

The recreated woodblocks will be kept at the Advanced Center for Korean Studies.