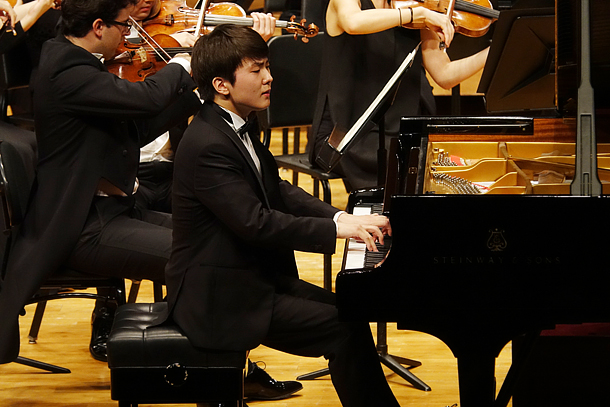 When it comes to classical music, the same pieces can range from terrific to terrifying depending on the conductor and musicians interpreting them.

Fortunately for Korean audiences, the Seoul Philharmonic Orchestra’s performance last Friday was firmly on the terrific end of the spectrum, thanks to conductor Yan Pascal Tortelier and the famous young Korean pianist Cho Seong-jin.

The performance was part of the orchestra’s ongoing 2016 Hana Classic Series II.

Tortelier, a distinguished French conductor, will be leading the Iceland Symphony Orchestra as its chief conductor from September. Cho, on the other hand, shot to fame after winning the 17th International Chopin Competition last October.

In the first half of the performance, which took place at the Seoul Arts Center, Cho played Chopin’s Piano Concerto No.1 in E Minor, Op.11, which was the same piece he used for the final round of the competition. His reprisal of the piece contributed to the concert selling out by late last year.

The piano concerto is one of two by Chopin, and it reflects the passion he had as a young composer.

Cho did justice to that passion, approaching the piece with an earnestness and ardor that was reflected in his exquisite treatment of each and every note.

His skill was particularly evident during the second movement, famous for its romantic and dreamlike atmosphere, which was nothing short of transporting.

After he finished, the young pianist was greeted with a loud round of applause, which he answered with an encore.

Cho previously performed the concerto with the Seoul Philharmonic Orchestra in 2009, under conductor Chung Myung-whun.

The second half of the concert, a performance of Tchaikovsky’s Symphony No. 4 in F minor, Op. 36, was a showcase for conductor Tortelier.

He skillfully maximized each movement’s distinctive color, and seemed to conduct less with the baton than his entire body - jumping, swinging arms and swaying to the music.

The imposing first movement starts with wind instruments, from horn to trombone. Tortelier built it to a climax that called to mind a massive wave crashing over a ship in a dark, stormy sea.

He led the second movement to calmer, distinctly melancholic waters.

In a change of pace, the third movement was made surprisingly comical due to the use of pizzicato, the technique by which string instruments are plucked rather than played by bow.

The movement also demonstrated the orchestra’s skill, as each musician had to play precisely to ensure that the sharpness of the notes blended and flowed. In one of the most notably complex sections, the pizzicato of a double bass flowed into that of a cello, viola and then violin.

The final movement features a soaring melody that Tortelier brought to forceful climax, providing a powerful and fitting end to both the symphony and the evening. BY KIM HYE-JUN [kim.hyejun@joongang.co.kr]