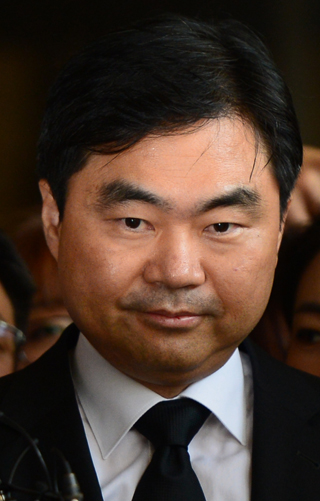 A local court on Sunday approved a pre-trial detention warrant for Jin Kyung-joon, the 49-year-old senior prosecutor mired in a major bribery scandal involving the mobile and online game company Nexon, finding it necessary to detain the suspect until prosecutors find more evidence backing up their charges against him.

With the latest decision immediately going into effect, Jin became the first director-level official in the 68-year history of the prosecution to ever be detained.

This comes nearly four months after the headline-grabbing case was first revealed by the Government Public Ethics Committee, which accused Jin of benefitting from shady stock transaction deals with the country’s largest game developer since 2005.

Jin, former director of the Korea Immigration Service, who is currently enlisted as a researcher at the Institute of Justice, a sub-organization of the Ministry of Justice, offered to resign from public service in April but has yet to gain approval from the ministry.

Justice Minister Kim Hyun-woong said he would thoroughly investigate all allegations in the case and take serious measures to prevent any similar cases in the future. Prosecutor General Kim Soo-nam is scheduled to preside over a meeting today 2 p.m. at the headquarters of the Supreme Prosecutors’ Office in Seocho District, southern Seoul, to discuss prevention policies with high-ranking officials within the office.

The justice minister is planned to attend a meeting at the National Assembly’s Legislation and Judiciary Committee today and publicly apologize once more over Jin’s disgraceful demeanor and introduce ways the prosecution would internally tackle the case. On March 25, the Government Public Ethic Committee discovered that Jin received 12.6 billion won ($11 million) last year from a sale of 853,700 Nexon shares, and suspected he took advantage of his public office and internal relations with Nexon stakeholders to gain such an extraordinary profit.

Jin had worked as a prosecutor for the Financial Intelligence Unit between 2002 and 2004, which operates under the Financial Services Commission. The ethics committee claimed Jin’s previous work enabled him to gain inside information on Nexon and build social networks there. Kim Jung-ju, owner of NXC, the holding company of Nexon, was pointed out as a possible accomplice given the fact he and Jin have been close acquaintances ever since they went to Seoul National University together.

Jin initially denied all allegations, claiming he bought the Nexon shares in 2005, when they were unlisted, with his own money. He sold them in 2006 at 1 billion won. With that money, he bought shares of Nexon Japan in 2006 and sold them last year at 12.6 billion won. In 2011, Nexon stocks were registered on the Japanese stock market and the number of shares expanded due to a stock split.

Nexon came forward earlier this month, saying it lent Jin some 425 million won to buy the unlisted shares. Nexon’s co-founder Kim Jung-ju reportedly ordered the company to lend the money to Jin at the time.

But the statement was overturned last Wednesday when Kim was summoned by the prosecution for questioning and reportedly said he had given the money to Jin, not lent it. The senior prosecutor subsequently submitted a written confession that same day confirming Kim’s claim, meaning Jin made nearly 12 billion won from stock trades he made no investments in.

The separate probe on Hanjin Group involves Jin’s brother-in-law, who founded a cleaning company in 2010 and had been providing services to Korean Air until recently. Authorities assume Jin pressured Hanjin Group to sign a business deal with his family member in favor of acquitting the company in a tax evasion case between 2009 and 2010.