Girl with no name struggles to find her place

Girl with no name struggles to find her place 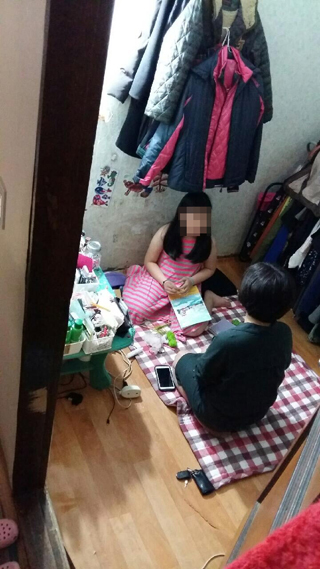 The 11-year-old “ghost child,” who goes by the pseudonym Seo-hyeon, talks with a social worker from the Gangdong District Office in her one-room cellar house earlier this month. [GANGDONG DISTRICT OFFICE]

It was a hot, humid day in September 2015 when Lee Pu-reuni, 32, a social worker in Seoul, first met the 11-year-old “ghost child” who goes by the pseudonym Seo-hyeon because she has no name of her own.

Seo-hyeon lives in a small room in the basement of a building with her 51-year-old mother.

Despite the scorching heat, Seo-hyeon sat earlier this month in the middle of a tiny room without an electric fan.

“Am I going to have real name now?” Seo-hyeon asked Lee.

Lee, who works for the Gangdong District Office in eastern Seoul, recalled how baffled she was when she first met Seo-hyeon, who doesn’t exist in nation’s demographics report.

Seo-hyeon’s mother, whose relationship with her husband became strained after his business failed, divorced him in 2006.

While the divorce was still in process, the mother became pregnant with Seo-hyeon by another man. She gave birth 10 days after completing the divorce.

Under existing law, because Seo-hyeon was born within 300 days of the divorce she is considered the child of her mother’s former husband. Her mother therefore had two options when reporting Seo-hyeon’s birth to the district office. She could’ve registered her daughter as her former husband’s child or she could’ve confirmed that the baby was not his and listed Seo-hyeon under her family register.

After the divorce, however, the mother couldn’t reach her former husband and thus had no choice but to file a case to the government proving that her former husband has no parental right over the daughter, thus allowing her to register Seo-hyeon under her family register.

When Seo-hyeon’s mother visited a lawyer’s office to process the case, they demanded about five million ($4,387) to six million won from her.

Her mother, whose monthly salary is slightly over one million, couldn’t afford the lawyer and so even the second option now became impossible.

“Even if I work in restaurants every single day I can’t earn more than 1.2 million won per month,” she said. “So of course I couldn’t afford to hire a lawyer. I had no one to ask for help and I didn’t know at the time that I could receive help from public attorneys for free. It’s all my fault.”

When Seo-hyeon turned 10, her mother again visited the community center hoping she could finally report Seo-hyeon and send her to school. The law, however, dashed her mother’s hopes again.

She had visited the community service center with Lee and someone from the neighborhood as witnesses to confirm Seo-hyeon’s birth.

A legal clause regarding birth reports stipulates that the government can recognize the birth of a person even without a hospital birth certificate if two witnesses are there to confirm it. But her mother was again barred from reporting Seo-hyeon’s birth since the district office demanded authorization from her father.

With many of her options exhausted, Seo-hyeon has been living life like a ghost child, without any legal identity.

Whenever her mother goes out to work, from 10:00 a.m. to late at night, Seo-hyeon, who can’t even go to school, is left alone in the house. Right beneath the light bulb, Seo-hyeon idles away her time by doing origami or weaving. By the time school finishes, she goes out to the playground to watch the kids play.

Seo-hyeon, whose citizenship isn’t formerly recognized by the government, can’t even receive treatment from the hospital when she’s sick. The best that her mother can offer her sick daughter is non-prescription medicine.

Fortunately, Seo-hyeon hasn’t yet suffered from any serious illness.

Despite her troubles, Seo-hyeon is a positive girl who always helps her struggling mother.

“I felt so ashamed of myself at the time for even thinking about ending my life and that of my daughter,” she recalled. “But I got myself together again thanks to Seo-hyeon.”

But they didn’t give up and next they sought help from nongovernmental or civic organizations. The region’s post office, moved by their endeavors, decided to donate rice and other groceries to the mother and daughter.

When donated goods were first delivered to Seo-hyeon and her mother, Seo-hyeon innocently said, “This is enough to last for the rest of our lives!”

The workers from the district office, as well as Lieutenant Han Jeong-il from the Gangdong police, also tried to report Seo-hyeon’s birth to the government and send her to a school. Although the mother and public officials consulted various legal advice centers to find ways to register Seo-hyeon’s birth, they still haven’t found a way.

Although Seo-hyeon is not yet a recognized citizen, on Tuesday a nearby school decided to accept her. Under the current law, students whose birth is not recorded can be taught in schools at the discretion of the principal.

After the school examined her scholastic ability, Seo-hyeon was placed in the fourth grade and is attending school starting on Thursday.

The elementary school teacher in charge of the fourth grade requested by phone that the school not be identified and refused to be interviewed, saying that if the girl’s identity were revealed it could impede her adjustment at the school.

“I regret not having more actively searched for ways to help Seo-hyeon,” said her mother, tears pouring down her cheeks. “I feel so sorry for my child.”