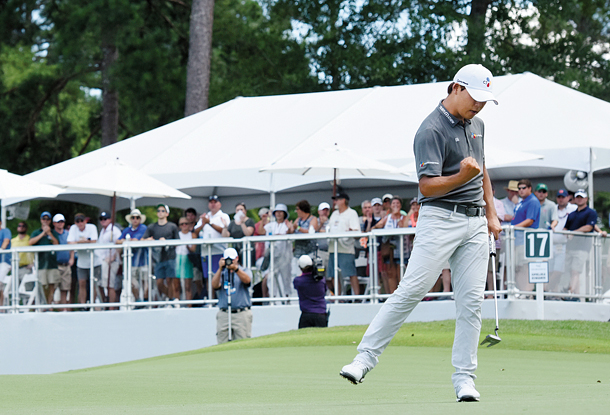 Kim Si-woo reacts after birdieing the 17th hole during the final round of the Barbasol Championship in Opelika, Alabama, on Monday. Kim came in second during the event, losing his chance to claim his first PGA win. [AP/NEWSIS]

Korean golfer Kim Si-woo missed out on his chance to win his first PGA tour event at the Barbasol Championship in Opelika, Alabama, on Monday.

Kim, 21, is ranked 150 in the world. He wasn’t a likely candidate for a title at the PGA event, even accounting for the fact that many top-ranking golfers skipped the Barbasol Championship to attend the Open Championship that took place in Scotland at the same time.

However, the Korean golfer kept a steady pace throughout the tournament, eventually finishing ninth by the third day. Kim then had the round of his lifetime in the championship’s finals. Averaging 301.2 yards in driving distance, Kim grabbed three birdies and six pars before the turnout after the ninth.

He then added three birdies from the 11th to 13th holes and even came out ahead in the 16th hole with an eagle. He landed a 230-yard second shot on the green, only 7 feet away from the pin for an easy eagle putt.

Although he was the solo leader up until the 17th hole, he missed his chance to win the title in the regulation at the final hole. Roughing his tee shot at the par-4 18th, his second approach shot went wide and missed the green. His 13-footer for par also failed as the ball stopped about 9 inches away from the pin.

While Kim bogeyed the hole, Australian golfer Aaron Baddeley parred and forced the outcome of the event to be decided in the extended round.

The first three rounds of the playoff were insufficient to settle the match, and it wasn’t until the fourth hole that the winner of the Barbasol Championship was determined.

At the end of the day, it was the 35-year-old Australian who clinched the fourth win of his career with a birdie.

“It was an exciting tournament,” Kim said, speaking through an interpreter, according to The Associated Press. “I had a slow first few rounds. I’m glad I finished the third and fourth round strong. The playoff was definitely a great experience for me on the PGA Tour.”