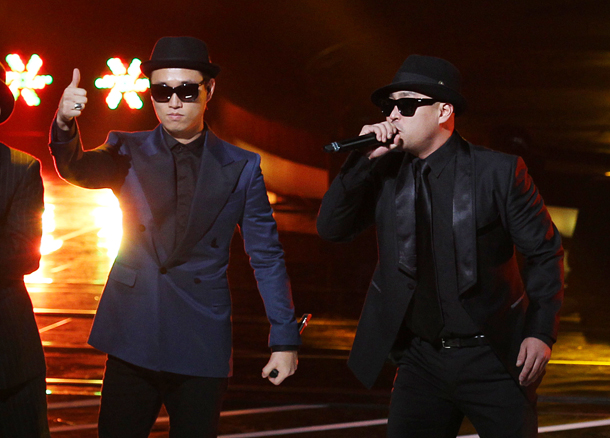 Hip-hop duo Leessang tried to forcibly evict a tenant from their building in Sinsa-dong, southern Seoul, for the second time at 10:30 a.m. on Monday, after he refused to vacate by May 30 as agreed.

The duo brought some 40 people to empty the space, where the tenant surnamed Seo has been running a gopchang (broiled cow intestine) restaurant in the last few years. They succeeded in about 20 minutes.

Although Seo brought people from a tenants’ rights group to interfere, there was no big physical conflict.

Leessang first tried to kick out Seo on July 7, but had to withdraw after three hours due to strong resistance from Seo and people from the same group.

Seo has been running his business in the building since 2010, before it belonged to the musicians. When the duo requested Seo move out after a year and a half, the tenant refused, saying he paid a high premium and had already invested a large sum of money in equipment.

The two sides agreed that Seo could move his restaurant to the building’s parking lots, located in the basement and on the first floor, for the next two years.

But when Seo set up a tent in the first-floor parking lot, it drew the ire of the Gangnam District Office, who said the tent was illegal and demanded he take it down.

Leessang pounced on the opportunity to cancel their contract with Seo, saying he had installed the tent without their approval and violated his lease.