Dive deep into the culture of Jeju’s haenyeo

Dive deep into the culture of Jeju’s haenyeo

Left: Conches the divers gathered during their class at Hansupul Haenyeo School. Top: Students stretch before going into the water with professional haenyeo. Above: Students dive using a basket attached to a floating ball, which also gives them a way to rest while in the water. [LEE SUN-MIN, JOONGANG ILBO]

JEJU, Jeju Island - The underwater world looms large in our imagination, and the desire to see what’s in the depths below has inspired many divers to temporarily don fins, tanks and masks.

But on Jeju Island, there’s a group of women for whom the ocean is more quotidian than imaginary - and they explore it without any gear getting in the way.

These haenyeo, which means “female diver” in Korean, are the only group legally allowed to gather shellfish like abalone and sea urchin, which they sell or eat. With a history almost as old as Jeju itself, they have played an important provider role on an island largely unsuitable for growing crops. While men would go farther out to fish, or stay home and attempt to farm, these women would free-dive in shallower waters up to seven meters deep.

The work has always been both challenging and dangerous, but unlike the past, there are now many other ways for the island’s women to make a living.

The number of haenyeo is decreasing rapidly as a result, and the profession itself has come to be seen by some as low-class. On the island, it’s reportedly an insult to tell someone, “Your daughter will become a haenyeo.” The actual descendents of the ancient divers express little interest in keeping the tradition alive.

But with the tradition facing extinction, people from both the regional government and private sector decided to work together to promote and preserve it. 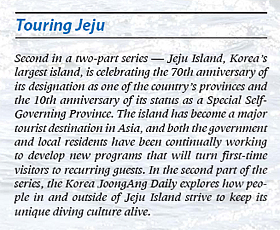 Enter the Hansupul Haenyeo School, which opened in 2008 to teach locals and visitors alike to dive like the haenyeo.

The school runs one four-month training program each year. Tuition is technically free, but this year the school began charging a 100,000 won equipment cleaning fee.

It accepts just 60 students out of the several hundred that apply for the program that runs from May to August. Although the haenyeo are traditionally women, the school reserves around 10 spots for men.

“Since the purpose is to widely promote who the haenyeos are and what they do, we try to make the population of students as diverse as possible,” said Choi Sang-hun, the manager director of the school, adding that the school purposefully chooses students who are both locals and not, and who range in age from their 20s to 50s.

“We choose people of diverse backgrounds and ages, and those who seem to work well in a community or those who seem really dedicated to learning the culture have a higher chance of being chosen.”

The program, which usually lasts for between three and four hours on Saturday afternoons, is taught by local professional haenyeos who take turns teaching.

They use a designated section of the ocean near the school’s location in Hyeopjae, on the western coast of Jeju Island.

The haenyeo have historically divided up the island’s coast among themselves, so the school said it was significant they agreed to allot this section to students.

To get a sense of what people learn during classes, as well as who joins and why, this reporter joined a recent session.

The students were scheduled to go to nearby Biyang Island to try diving in a new location when this reporter visited, but the rainy weather didn’t allow the ferry to depart. Instead, the students who gathered at around 7 a.m. were given the option of diving in familiar waters or practicing indoors.

Many of the students used the time to practice holding their breath, which is among the most important skills for aspiring free-divers. 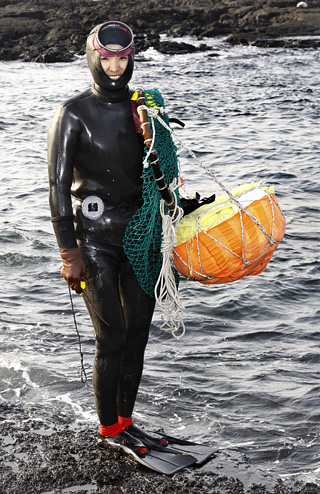 One student started an application on her smartphone called Static Apnea Trainer, which gave the students intervals to use in breath practice. It gives about 60 seconds of “underwater time” - during which the students held their breath - followed by a 60-second break.

This reporter, who at first had a hard time holding her breath for more than 30 seconds, soon improved, and by the end of the 10 intervals found a minute to be relatively easy.

The students in the group said they usually practice together, as it’s more fun and holds them accountable.

The students enrolled for different reasons. Some wanted to deepen their experience of the island during a temporary stay, while others saw it as a second career. Others still said they wanted to help protect the dying tradition.

Elizabeth Maltby, a 26-year-old American who works at Korea International School Jeju, and Agnes Sohn, an American Ph.D candidate who is researching immigration to Jeju Island, both enrolled to maximize their experience of the island. It’s something they can talk about to other friends rather than a potential job.

Others were drawn by the opportunity to improve in their primary career.

Kang Soo-seun, a 35-year-old chef who works with Japanese cuisine, said learning how to dive is about better understanding the ingredients she uses. Unlike many of the other students, Kang’s mother is a haenyeo, but she says she still doesn’t intend to follow in her footsteps full-time. She likes how the classes build a bridge between her and her mother, but she’s more interested in how the experiences can make her a better chef.

Some of the students are more serious about becoming career divers.

Lee, the finance worker from Seoul, and Lee Dong-ryul, who moved to the island from Seoul after retiring last year, were both considering it as at least a part-time job.

The former Lee was considering it as an option to make some extra money after she retires and moves to the island.

The latter Lee, on the other hand, saw learning to dive as the first step in starting a new career as an expert in haenyeo culture. He’s banking on more people becoming interested in it, particularly as the government works to register haenyeo with Unesco as an intangible cultural heritage asset.

“It’s a chance for me to become an expert in something that not many people want to learn more about,” said Lee, adding that soon the country might look for those with diving experience to pass the culture on to future generations.

“Haenyeos working now are all getting older, and there’s a chance that the students who learn directly from them will be responsible for explaining haenyeo culture in the coming years.”

The classes are typically taught by up to six haenyeos, most of which are in their 70s. Those in their 60s are considered relatively young.

After the students put on wetsuits and goggles, they headed into the water carrying a floating basket. Managers, including director Choi, watched to make sure students didn’t drift into deep waters, allowing them to focus on their dives.

The students were divided into three groups based on their skill level, with those who have managed to bring something up from the ocean floor in the top group. The professionals encouraged students to watch how each other dive underwater. There’s no set training program for how to dive as a haenyeo, so the professionals told students to dive by feel and answered questions as they came up.

“Try diving at an angle to get less water resistance,” or “Peddle faster with your feet fins,” were some of the most frequent bits of advice heard. The haenyeos also lent their hooks so that novice divers could stay in the water longer and dig through cracks to find sea urchins, which are in season and visible enough for even this reporter.

Haenyeos also demonstrated how they dive, allowing the students to see the unique ways they move their bodies. They easily retrieved sea urchins and conches, cracking open some urchins and feeding them to students to inspire them more to work harder.

“We can’t help those who don’t ask questions,” said one of the haenyeos after spending two hours with the students in water.

“We want them to learn as much from us as they can, so that they’ll be the ambassadors for haenyeo-style diving in the future.”

At the end of the day, the students usually lay out their catch to take photos. Since they are not yet professionals, they usually throw most of it back.

Although being a temporary student at the school was memorable, it’s not an option for most, as the Hansupul Haenyeo School doesn’t typically allow people to drop in. That means the best way to experience diving like a haenyeo is to apply for a spot in next year’s class. The school begins accepting applications in April. For more information about the school, go to cafe.daum.net/jejudiver or call (064) 796-5521. Information is also available at the town office in Hanlim, where the school is located, at (064) 728-7616.