Average beef and pork prices shot up in June

Average beef and pork prices shot up in June 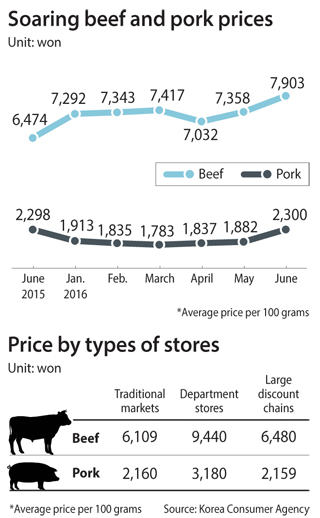 The average price of beef and pork products at local retail stores rose significantly in June compared to the previous month, as peak summer vacation season kicked off here in Korea.

Samgyeopsal, or pork belly, is one of the most popular meats that many vacationers enjoy during their summer vacation trips.

“We don’t know the exact reason for the rise in prices, but we believe that demand for beef and pork has increased as summer vacation season approaches,” said KCA researcher Kim Eun-ji, “which is when more people tend to barbecue or go camping.”

The year-on-year growth rate for beef was 22.1 percent, the highest among major products sold in retail stores and traditional markets in Korea.

The KCA analyzed the price of 402 major products sold in 269 stores across the country, and the agency found that the price varied by types of stores.

In fact, the average price of beef sold at department stores was highest at 9,440 won per 100 grams, while it was the lowest at traditional markets at 6,109 won. The price gap between the two types of stores was 54.5 percent, or 3,331 won.

According to the KCA, the price of onions had the largest gap by store type at 78.3 percent. The price of 1.5 kilograms of onions is 2,422 won at large discount chains, while the same was sold at 4,319 won at department stores.

Meanwhile, the price of Napa cabbages, radishes and onions fell in June compared to the previous month. The price of cabbages fell 25.9 percent, and that of radishes dropped 22.4 percent. The price of onions went down by 11.2 percent in June.

“Even though the prices of these vegetables dropped significantly from the past, the recent data shows that they are rising once again as of the third week of July due to abnormal weather including heavy rain and high temperatures,” said Kim at the KCA.

Pork, Napa cabbages, radishes and onions were some of the products that were cheaper at large discount stores in June compared to their prices at other types of stores.

Beef, disposable diapers and laundry detergent were products that were cheaper at traditional markets.