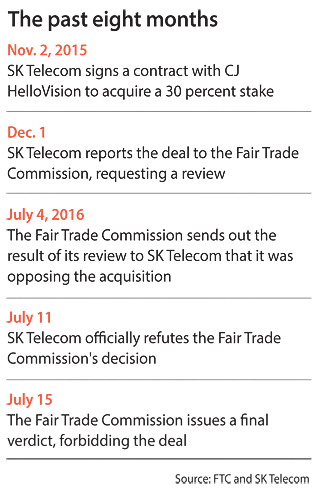 “After reviewing SK Telecom’s acquisition of CJ HelloVision and merger between SK Broadband and CJ Hellovision, we concluded that the deal may effectively limit competition in the paid broadcasting market as well as the telecom retail and wholesale markets,” Shin Young-sun, secretary general of the antitrust watchdog, said in a press briefing on Monday.

The announcement comes two weeks after the FTC made official that it was opposing the deal and eight months after SK Telecom signed the contract with the paid video content service arm of CJ Group.

Last December, the top telecom service asked the regulator to review the M&A plan. Now, SK Telecom will have to nullify the contract. Under the deal sealed last November, SK Telecom was set to acquire 53.9 percent of CJ HelloVision from its affiliate CJ O Shopping for 1 trillion won ($870 million) and merge it with its wholly-owned subsidiary SK Broadband.

The deal would have given birth to a mega-giant in both the cable and telecom industries. CJ HelloVision is in both the cable TV and budget mobile phone subscription business and SK Telecom runs an internet protocol TV (IPTV) service. CJ HelloVision is No. 1 in the budget mobile business and SK Telecom’s subsidiary, SK Telink, is No. 2. SK Telecom has the second-largest number of IPTV subscribers after KT.

Asked why the FTC decided to forbid the M&A instead of demanding a partial stake transaction or imposing bans on the merged entity from raising fees for cable TV subscriptions to a certain level to mitigate the impact on related businesses, Shin said such measures would not be sufficient to limit the potentially immense repercussions. If the IPTV networks owned by SK Broadband and cable networks operated by CJ HelloVision nationwide are put together, the combined market share shoots up to between 46 percent and 77 percent in 21 out of 23 regions where CJ HelloVision is available.

That is deemed a monopoly under the Fair Trade Act.

Shin also cited the possibility that CJ HelloVision would be less inclined to join the move among telecom operators to drag down basic monthly subscription fees after the M&A.

In response to the FTC announcement, SK Telecom said it would humbly respect the result, adding it would “do its best to help the domestic media industry leap one step further in the global arena.” But at the same time, SK Telecom noted it was regrettable that the company failed to persuade the regulator to issue an approval for the deal after seeking it so persistently.

“Global media companies are waging ‘borderless warfare’ in the over-the-top content business [delivery of audio and video content over the internet], and changes and innovations are urgent when Korea cannot be an exception in the competition,” it added.

SK Telecom rivals KT and LG U+, meanwhile, released a joint statement following the FTC’s decision that said they respected the result.

“We greatly feared more monopoly in the broadcasting and telecom markets and the loss of consumer welfare caused by SK Telecom’s acquisition of CJ HelloVision,” the statement said. “So we have been expressing the view that the M&A should be banned, and the FTC’s decision reflects this.”