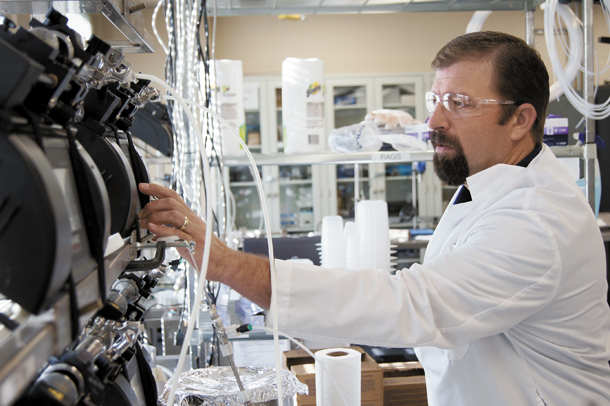 CINCINNATI - Global consumer goods company Procter & Gamble revealed its R&D center at its headquarters for the first time to foreign journalists since the company was founded in 1835, in an attempt to drum down escalating safety concerns over its air freshener Febreze.

The unprecedented move comes amid the ongoing Oxy catastrophe in Korea that resulted in the death of more than 100 people, including infants and pregnant women. Since Febreze was recently found by the Korean government to contain a toxic chemical similar to the one found in Oxy’s deadly humidifier sterilizer, safety concerns have surrounded the products’ use.

Because there was no existing data of the consequences of inhaling the products’ ingredients, a major factor in Oxy’s fatal incidents, Korean consumers have become cautious about using the air-freshening spray.

Febreze is frequently used to remove odor from clothing or other fabrics, such as those resulting from preparing samgyeopsal, or pork belly. Korean barbecue restaurants often have Febreze on hand for customers. 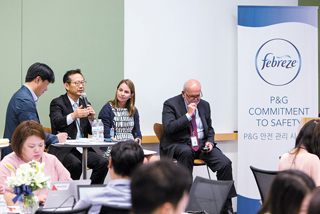 Soga Kwon, second from left, a human safety toxicologist at P&G answers questions about Febreze’s toxicity from Korean reporters who visited the company’s headquarters last week. Jane Rose, third from left, another toxicologist affiliated with P&G and John Caldwell, fourth from left, an emeritus professor of toxicology at the University of Liverpool, also addressed the product’s safety. [P&G KOREA]

Korea is P&G’s third-biggest market after the United States and Japan.

The consumer goods giant also revealed some of the safety procedures for Febreze products at the Ivorydale Technical Center, the company’s largest R&D center, before the spray lands in consumers’ hands.

P&G scientists said the air freshener, which has been used for 15 years in 80 countries, is “100 percent harmless,” even though it contains toxic chemicals like DDAC and BIT, because the amount is miniscule.

In scientific journals, the water-soluble DDAC chemical has been found harmful when inhaled in large doses. BIT, used in Febreze for sterilization, is also harmful in large doses.

At P&G headquarters on Tuesday, a group of toxic specialists including Soga Kwon, a Korean toxicologist at P&G, said Febreze contains an amount of DDAC that is 447 times less than the safety limit set by the U.S. Environmental Protection Agency.

According to Febreze’s chemical assessment by three third parties - Lonza, Mason Chemical and Stepan Chemicals, the air-freshening product contains 0.032 micrograms per cubic meter of DDAC, more than 400 times less than the safety limit set by the government.

Even the 0.032-microgram-per-cubic-meter mark represents more than what an ordinary consumer would normally use because P&G takes the most radical user of their products in Korea as a sample. On average, P&G said the average Korean consumer sprays the product five times a day, while the most extreme sample uses the product 11 times a day.

“We aggregate data on how consumers use Febreze and roll out experiments based on the most radical usage of the product,” Kwon said at a Q&A session Tuesday with team leaders from P&G’s R&D centers.

Additional support for the product’s nontoxic feature comes from the size of liquid particles that Febreze sprays out. The size of DDAC-containing liquid particle ranges from 85 to 120 microns depending on the container.

However, according to Jane Rose, a toxicologist affiliated with P&G, only particles smaller than 10 microns can reach the lungs, which can have adverse effects on the human body. The particles sprayed out from a nebulizer are about 5 microns.

Particle sizes from the humidifier sterilizers are “nano-size,” said Kwon, who referenced several academic journals that he did not identify. When particle sizes are larger, the chemical in question falls quickly to the ground, making it almost impossible for users to ingest.

“The particle doesn’t exist in the air after one minute,” Kwon said.

The fragrance stays in the air for more than a minute, but scientists said that the smell is a “volatile element” that has no effect on the respiratory system. There are peculiar moments when people smell the clothing right after spraying Febreze to enjoy the scent. However, even in those cases, since the DDAC particle immediately sticks to the garment, the particle doesn’t enter the body, Kwon said.

The unprecedented invitation of the Korean press to Cincinnati is seen as a rescue plan for Febreze, one of the local unit’s best-selling products. The fact that P&G Korea did not fully disclose the ingredients of Febreze on the product label or its website intensified suspicions. In Korea, however, a consumer goods company is not obligated to reveal the ingredients of its products, as it is in the United States.

On May 16, the Korean Ministry of Environment requested the multinational company’s local unit disclose the product’s ingredients, and P&G Korea responded. The next day, the Korean authority said the product contained miniscule amounts of DDAC and BIT, 0.14 and 0.01 percent, and that it was harmful to consumers.

In a response to concerns from Korean consumers, P&G prepared a media session to curtail further anxiety.

“We have signed an MOU with the Korean Ministry of Environment to cooperate actively in testing our products’ ingredient,” said Jooyoun Kim, general manager of P&G Korea.

“We take safety very seriously, which is why we develop our products based on the country that has the most conservative and picky safety standards on household items.”

P&G Korea is awaiting the results of an inhalation toxicity test this month by the Ministry of Environment. “There is nothing much we can do other than wait for the ministry’s test results after fully cooperating by providing them with the full list of ingredients included in the product,” a spokesman said. “We are pretty confident about the test result.”