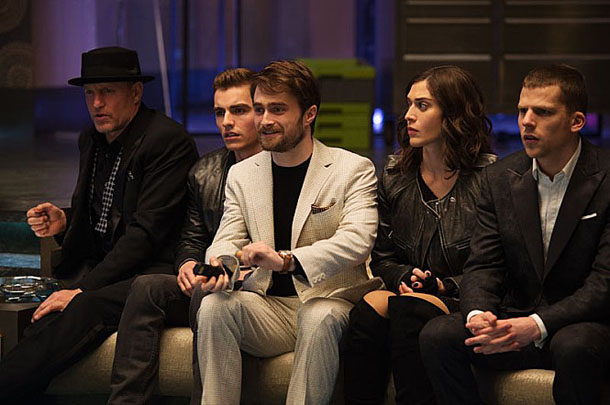 Hollywood heist film “Now You See Me 2” was the top opener in the local box office over the weekend. [LOTTE ENTERTAINMENT]

Hollywood heist film “Now You See Me 2” was the top opener in the local box office over the weekend. The film sold one million tickets across 1,200 screens nationwide from Friday to Sunday, according to the Korean Film Council on Monday.

The thriller sequel, which accounted for 36 percent of ticket sales over the weekend, follows four illusionists who are hired by a tech prodigy, played by Daniel Radcliffe, to plan yet another round of heists using their talent.

Korean zombie flick “Train to Busan,” starring Gong Yoo of “Coffee Prince” fame, ranked second. Although the film is set to officially release this Wednesday, it began screening over the weekend through previews.

“Train to Busan” has received rave reviews from the press for its fast-paced action scenes. The film takes place aboard a high-speed train to Busan, where a zombie virus breaks out and passengers fight for survival. It is the first major Korean zombie movie.

Both “Now You See Me 2” and “Train to Busan” came under fire for selling tickets through previews before their official release dates.

Major local distributors often prerelease films through previews, arguing that such screenings are done in order to gauge audience feedback. But budget films and small distributors say preview screenings of major blockbuster movies deprive them of chances to screen their films.

Pixar’s “Finding Dory,” which was released in Korea in the second week of July, came in third over the weekend.

Other new films that made the top 10 list in ticket sales included Hollywood thriller “The Shallows” in fifth, “Demolition” starring Jake Gyllenhaal in seventh, Korean newsroom drama “Trick” at No. 8 and German comedy “I’m Off Then” in ninth place.

“I’m Off Then” has been getting rave reviews in the local press, as it deals with the journey of a man who walks the Camino de Santiago, or the Way of St. James, a pilgrimage route that is well-known amongst many Korean travelers. The film is based on the book “Ich bin dann mal weg” by Hape Kerkeling.