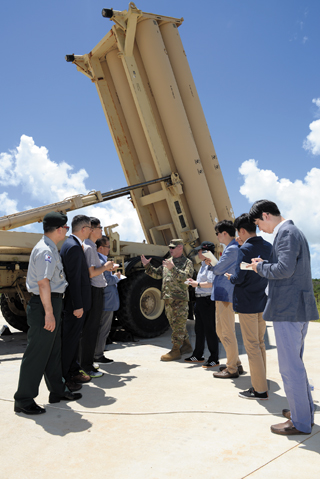 A U.S. soldier at the Terminal High Altitude Area Defense battery in Guam explains the missile defense system to a group of Korean reporters who were allowed to visit the base on Monday to check whether electromagnetic waves from the AN/TPY-2 phased array radar are harmful to human beings. [JOINT PRESS CORPS]

The U.S. Department of Defense is in the process of developing an upgraded version of its Terminal High Altitude Area Defense (Thaad) system, which leads to questions on what the future of the missile defense system means for Seoul’s military information-sharing and authority over operation of the battery.

On Monday, the JoongAng Ilbo and Korea JoongAng Daily confirmed through a February budget report by the Defense Department’s Missile Development Agency (MDA) that Washington is working on upgrading the current Thaad 1.0 system, which is complete, to so-called Thaad 2.0 software over the next several years.

Seoul and Washington this month announced their decision to deploy a Thaad system in Seongju County in North Gyeongsang, which the allied countries claim is to bolster defense against Pyongyang’s nuclear and missile threats. This decision, however, has drawn both international and domestic backlash.

A Thaad battery is comprised of the powerful AN/TPY-2 phased array radar, six mobile launchers, 48 interceptor missiles and a fire control and communications unit. Thaad 2.0 is mainly a software development that is expected to expand capability to defend against threats in multiple regions, which means at different ranges, while increasing integration with Washington’s other ballistic missile defense elements. 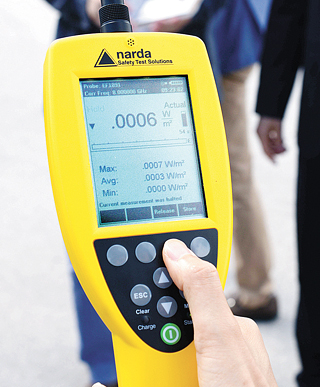 A reporter from Korea measures electromagnetic waves in the vicinity of the Thaad battery in Guam on Monday. [JOINT PRESS CORPS]

This advanced software, according to the unclassified MDA report, is built to deliver enhanced system capabilities and improve the defense of allies and deployed forces from short-to-medium-range threats. The report describes the Thaad 1.0 configuration as “completed” and says that it is in the process of “developing the Thaad Build 2.0” within four years.

The original Thaad system is described as providing “a capability to engage threats both inside and outside the atmosphere in their terminal phase of flight, including engagements against short to medium-range ballistic missiles and asymmetric threats.”

This report further says that Thaad 2.0 “consists of multiple, independent software builds… to expand the capability of the Thaad 1.0 system,” and has a projected capability delivery by 2019. These new capabilities include a launch on a Link 16-based ballistic missile defense system (BMDS) track, which it said will “provide the ability to initiate an engagement and launch Thaad interceptors using sensor data provided by BMDS sources outside the Thaad battery.” The Link 16 connection is a tactical data exchange system used by Washington and NATO countries to share military data.

Along with software upgrades, Thaad 2.0 will also expand its regional peer-to-peer engagement coordination with its Aegis and Patriot ballistic missile defense systems, improve the system’s performance in high-debris environments and expand defended area footprints through the operation of remote launchers. It will also secure a “Message Based Regional Engagement Command” to process command, control, battle management and communication, or C2BMC, messages to obtain direction for target engagement.

Justice Party Rep. Kim Jong-dae of the National Assembly’s Defense Committee said, “The essence of missile defense is a global network,” adding that Korea “has not properly evaluated this essence of Thaad.”

A defense official pointed out that asking “who has the authority to launch interceptors” is a key factor in the transfer of the missile defense system.