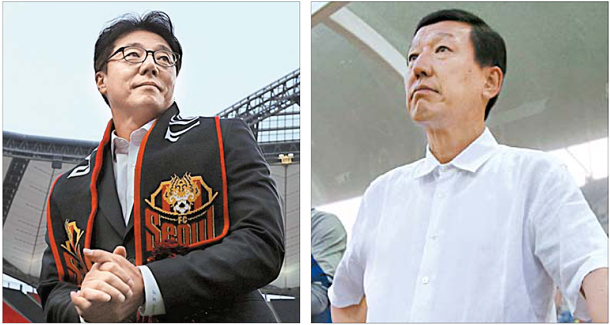 Hwang Sun-hong, left, and FC Seoul will host Choi Kang-hee, right, and Jeonbuk Hyundai Motors today at its home, Seoul World Cup Stadium. FC Seoul and Hwang will try to give Jeonbuk its first loss in the league this season. [K-LEAGUE]

The time has finally come for the showdown between Choi Kang-hee’s Jeonbuk Hyundai Motors and Hwang Sun-hong’s FC Seoul. While Jeonbuk looks to maintain its current solo lead tonight, Seoul hopes to change the dynamics of the league by taking down its rival.

“The match against Jeonbuk is more than just a game,” said Hwang.

The K-League Classic was supposed to be a Seoul-Jeonbuk duopoly this year. As expected, the two went back and forth between No. 1 and No. 2 in the rankings earlier in the season. But Seoul began to collapse when former manager Choi Yong-soo left to take over China’s Jiangsu Suning FC. Hwang took over the helm immediately but it took a while for Seoul to adjust to such a dramatic shift. While Seoul was going through a transition, Jeonbuk secured its spot at the top.

Jeonbuk has amassed 42 points in the league standings, taking the dominant position over Seoul. With 11 wins and nine draws, Jeonbuk is the only undefeated team in the league.

On the contrary, Seoul has collected 34 points total, the same as Ulsan Hyundai FC who is ranked third. Sharing the same season record as Ulsan - 10 wins, four draws and six losses - Seoul is ahead of Ulsan simply because of the goal difference.

Hwang, who appeared during Seoul’s press conference on Monday, emphasized this fact. “I am aware that we need to stop Jeonbuk’s monopoly,” said Hwang. “This is why the match against Jeonbuk is important. We won’t back down. We are staking everything we have into this week’s match” against Jeonbuk.

“Records are there to be broken,” said Hwang, indicating his confidence the team will beat Jeonbuk’s undefeated record. “I am sure Jeonbuk is more pressured than we are and we need to exploit this.”

It seems like the transition period for Seoul under Hwang’s watch has ended. In the first three matches, Hwang and Seoul took home a draw and two losses. But during their fourth game, an FC Cup quarterfinals match against Jeonnam Dragons FC, Seoul emerged with a victory in an arduous match that went all the way to the penalty shootout. After winning the quarterfinals match on July 13, Hwang and his squad took on Incheon United FC on July 17 for the 20th round K-League match. Oris Kevin of Incheon scored the opening goal of the match to take the lead, but the match was quickly equalized when Incheon’s Kim Tae-su scored an own goal. Finally, Seoul’s Park Chu-young drilled a shot with his right foot from outside the penalty area to score the winner, giving his new skipper the first league win.

Seoul has momentum and the question boils down to whether it can actually extend it against Jeonbuk and beyond.

“Players must step into the pitch with the confidence that they can win. Agitation and uncertainty will only generate losses,” Hwang continued. “We won the past two games. Through the win, we were able to find our style of play. To further perfect our games, we need another win.”

Dejan Damjonovic, who was also at the press conference, said, “Jeonbuk is a good team. But our team has been doing well. To stay competitive in contending for the trophy, this game is crucial.”

“We will play our best game. I will try my best to score and contribute in team’s win,” the Montenegrin added. “We have a new manager. We are trying our best to follow his new tactics and ideas. Hwang is without a doubt one of the best forwards in Korea’s history. We trust him.”

Jeonbuk and Seoul will play tonight at 7:30 at Seoul World Cup Stadium.