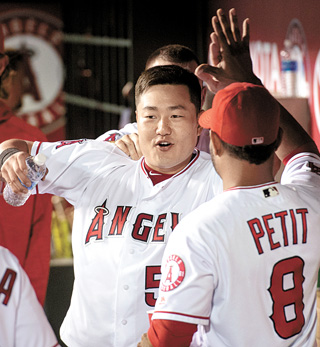 Choi Ji-man of the Los Angeles Angels receives the “silent treatment” from his teammates after hitting his first career home run. [AP/NEWSIS]

While veteran big leaguer Choo Shin-soo of the Texas Rangers did not have much to show during Tuesday’s Major League Baseball (MLB) game against the Los Angeles Angels, rookie Choi Ji-man of the LA team celebrated his first big moment in the MLB with a home run.

Batting seventh during the Angels’ 9-5 win over the Rangers, the first baseman went deep at the bottom of the fifth inning, when the Angels were behind by two runs. Facing the first pitch from Rangers starter A.J. Griffin, Choi hit the ball over the right fence, marking his first big-league homer.

Ever since he moved to the United States straight out of high school six years ago, Choi mainly played in the minor affiliates of the Seattle Mariners. Although he was added to the Mariners’ 40-man roster in late 2013, he quickly faded after being mired in a doping controversy and injury.

Choi then joined the Angels prior to this season through the 2015 Rule 5 Draft, a recruitment process to prevent teams from stockpiling too many young players in the minors.

Although Choi was included in the opening day roster of the Angels, he cleared waivers in May and eventually accepted a demotion to the Triple-A Salt Lake Bees, a minor league affiliate of the Angels. He then came back up to the majors earlier this month to replace injured first baseman C.J. Cron.

Choi was greeted by his teammates at the dugout with the “silent treatment,” an MLB tradition in which teammates at first do not acknowledge a player’s first homer until he is well settled back in the dugout, only to congratulate him all at once as a surprise.

The Rangers’ Choo, excluded from the starting roster, went into Tuesday’s game as a pinch hitter to go 0-for-1.