China’s obsession with the sea

China’s obsession with the sea 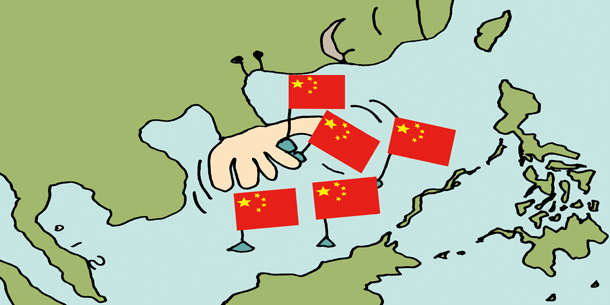 China is hungry for the South China Sea. It claims sovereignty over virtually the entire strategic waterway with rivaling interests overlapped by six states. It uses the so-called nine-dash line, stretching hundreds of miles south and east from its southernmost island Hainan, to claim “inherent” ownership of the waters and lands cited in a map from the Qing Dynasty. China maintains it redeemed ownership of the area from Japan after the end of the war and proclaimed sovereignty in 1958.

Its claim encompasses 90 percent of the largely uninhabited rocky outcrops, sandbanks, reefs and waters that serve as the primary shipping route for Asian countries and fishing grounds for the Philippines, Vietnam, Malaysia, Brunei and Taiwan. The region and international community believe China has been pursuing the claim to secure the upper hand in the maritime sea route for oil transport and power against the United States.

China has been variously under attack by Western societies by way of this sea. Its hyper-paranoia over foreign invasion made the national founder Mao Zedong pronounce its maritime ambition in his 1953 address. The country needed a powerful navy to fend off foreign aggression, and could never be at peace as long as the Pacific was under the influence of the U.S. Mao emphasized that if the navy became as powerful as its ground and air forces, foreign powers would never be a threat to China.

Historically, all global powers had sea prowess, from the ancient Greek kingdoms of Athens and Carthage to Venice, Portugal, Spain, the Netherlands, Britain and Japan, and in the modern age, the United States. China, now commanding an economy 63 percent the size as the United States’s, has become outright greedy in its ambition to become the next sea power. In its party convention in November 2012, it proclaimed itself a naval power.

Around 500 million people live along the South China Sea. The sea traffic there is triple that of the Suez Canal and double that of the Panama Canal. About 90 percent of shipment to China passes through the sea. There are three primary shipping routes on the globe — the Panama Canal, the Suez Canal and the Straits of Malacca, which lies within the South China Sea. The narrow stretch of water between the Malay Peninsula and the Indonesian island of Sumatra is an important pass for large crude carriers and other strategically important cargo traveling to China.

President Hu Jintao grew anxious of the country’s energy security after 2003, particularly the oil supply, fearful that disruption in the smooth flow of energy could undermine the country’s economic progress. Its heavy use of the Malacca Strait posed as a problem. More than 80 percent of its annual 270 million tons of crude oil imports had to go through the strait, which came under the protection of U.S. naval forces.

To lessen its dependence on the waterway, China imports 10 percent of its petroleum from Russia and Kazakhstan and another 8 percent from Myanmar. It plans to build another pipeline to Pakistan, yet it still relies heavily on the Malacca pass. It has been exploring oil in the Xisha, or Paracel Islands — the group of islands, reefs and banks south of Hainan that is also claimed by Vietnam and Taiwan — since 2014 despite questionable economic value. China insists it has sovereignty over the waters and territories around the South China Sea for the security of its oil supply route.

The area emerged as a flashpoint because Beijing’s strategic interests collided with Washington’s Pivot to Asia policy. Beijing maintains territorial issues are part of the “strategic interest” of the country that cannot be negotiated. But the exercise of its military and economic clout to assert maritime claims goes beyond its defense of national interests; it boils down to forceful influence-wielding, which leaves no room for any meddling from third countries.

Its unilateral position, backed by its military and economic power, stems from disregard for other regional players. It blatantly rejected a recent ruling by The Hague-based Permanent Court of Arbitration in a case initiated by the Philippines and any interference from the United States on its claims of ownership in the area. The country is building its second aircraft carrier for completion by 2020 and plans to up the fleet to four in the hopes of overwhelming the U.S. fleet in the Pacific.

The international relationship between these two is governed by an equilibrium of power. China has upped its maritime assertiveness because its neighbor countries have become fearful of military and economic clashes. The South China Sea is ultimately the stage for a strategic contest of power between China and the United States. America could affirm its power in the region if it could rein in Beijing’s territorial claims for the sake of protecting its freedom of navigation. If not, the U.S.’s Pivot to Asia policy may prove to be empty rhetoric.
Translation by the Korea JoongAng Daily staff.


*The author is director of the China Economy and Finance Research Institute.