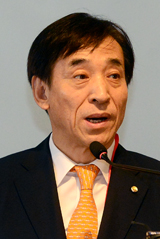 “Structural reforms bring difficulties to the economy in the short run, but increases in the efficiency of resource distribution have positive impacts on employment and economic growth in the long term,” Lee said.

“Monetary easing is needed, but we should be aware of financial risks. If the economy regains resilience through the structural reforms, the degree of expansion of macroeconomic policies can be adjusted to minimize adverse effects.”

The BOK froze its base interest rate at an all-time-low of 1.25 percent on Thursday. But Lee said the central bank will maintain its expansionary tone going forward, leaving the door open for a further rate cut.

“The expansionary tone for monetary policy is needed to prevent the low-growth trend from prolonging further,” Lee said. “But that shouldn’t undermine stabilization in the financial market.”

The central bank cut its 2016 growth forecast for the economy from 2.8 percent to 2.7 percent, citing increased uncertainties tied with Britain’s vote to leave the European Union, possibilities of a prolonged global trade slowdown and weak domestic exports as the main factors.

“A small open economy like Korea has high financial risks including rapid capital outflow and currency depreciation when it has overly expansionary monetary policies,” Lee said.

Hyun Jung-taik, president of the KIEP, supported Lee’s position, saying, “rather than seeking expansion in monetary and fiscal policies, it is desirable to see them going toward supporting structural reforms.”