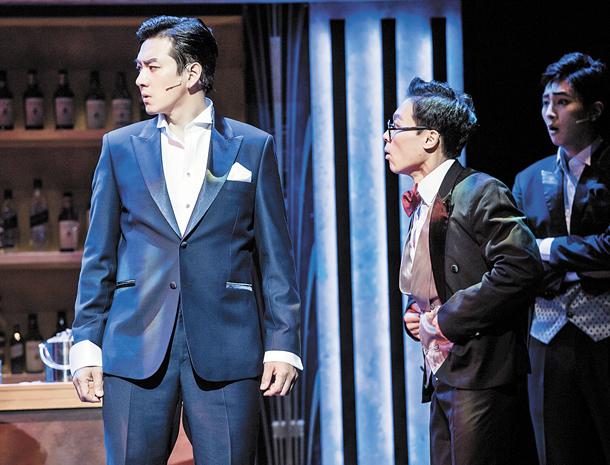 Veteran actor Song Il-kook made his musical debut in the Korean production of the Broadway classic “42nd Street,” which is currently being staged at the Seoul Arts Center. He plays the role of Julian Marsh. [SEM COMPANY]

Actor Song Il-kook is back on stage, but this time he’s singing and dancing.

Song recently made his musical theater debut in the Korean production of the classic American musical “42nd Street,” currently being staged at the Seoul Arts Center in Seocho-gu, southern Seoul.

Local theatergoers may be suspicious of Song’s readiness for the part. He’s not a professional singer or dancer, and the glamorous show business character doesn’t seem in line with Song’s previous roles. He has mostly played heros like Korean independence activist An Jung-geun in the play “I Am You” and Jumong, the founder of the ancient kingdom Goguryeo (37 B.C. to A.D. 668), in a megahit drama series.

Still, Song says he’s improving with every performance thanks to support from his fans and family.

“I have a fan who sends me a letter after almost every performance,” said Song. “She comments on my show and even gives me a grade. For the last show, she gave me 70 out of 100. I will try to reach 80 before the musical ends its run.”

To hear more about Song’s new challenge, the Korea JoongAng Daily sat down with him for an interview. Here are some edited excerpts.

Q. You already have a successful career as a film actor. Why did you decide to challenge yourself with a musical?

A. “Like” doesn’t come close to fully describing my affection for musicals. It was my everlasting dream [to appear in a musical]. I never thought this dream would come true as I’ve never sung nor danced [in front of an audience]. Since I was very young, I have thought that musical actors were the “real” actors: they can dance, sing and act at the same time. Thus, I only dreamt of being a part of a musical — until that dream came to reality thanks to veteran musical actress Choi Jung-won, who recommended me.

You played the role of An Jung-geun in the play “I Am You” and garnered much attention from Korean theatergoers. Did that experience help you prepare for the musical?

I played that role for three years. In fact, Choi thought I would suit the musical after watching the play. It is my second time performing on stage. Now that I think of it, I wouldn’t have been able to perform in this musical if it weren’t for that play. Thanks to that experience, I was able to learn how to deal with a live stage and also overcome the fear of performing live.

“42nd Street” has featured many veteran actors in Korea, so it must have been stressful putting your own spin on the character of Julian Marsh. How did you do that?

Although she’s a woman, actress and director Yoon Suk-hwa was my role model for this character. [Yoon previously directed Song in “I Am You.”] She, as a director, is a genius. Her passion for her own performances is great and she is very sensitive to even trivial elements such as sound and light. I really think I was lucky to have started my career as a performer under her [charismatic] direction. At first, I thought of making the character more authoritative and sedate. But since my voice is very low, it felt as though I was acting the character of An Jung-geun once again. I realized I needed to develop a different style.