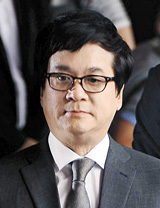 CJ Group Chairman Lee Jay-hyun has decided to cancel an appeal of his tax evasion and embezzlement conviction, citing his poor health condition, the company announced on Tuesday.

The chairman was sentenced to two and a half years in prison and slapped with a 25.2 billion won ($22.2 million) fine during a retrial in December.

As prosecutors did not file for appeals as well, Lee’s decision confirms his prison sentence, and now all eyes are on whether Lee will be included in the list of businessmen receiving a special presidential pardon, which is being prepared by the Park Geun-hye administration for Liberation Day on Aug. 15.

CJ Group has argued that Lee’s health is worsening throughout the trial process and that he will not be able to stand any more of the trials.

“We decided to drop the appeal case as Chairman Lee’s condition is deteriorating rapidly and to file for a stay of execution since he might run into a fatal situation if he is imprisoned,” CJ Group said on Tuesday.

“He is a human being before he is a chairman of the group. We hope [he is guaranteed] the right to life and right to treatment.”

In order for Lee to be considered for a pardon, his sentence needs to be confirmed before the pardon takes place. His decision to drop his appeal and accept his sentence qualifies him for consideration on the list.

Lee has suffered a number of health problems including Charcot-Marie-Tooth disease and side effects following a kidney transplant in 2013. The neurological disease impairs the patient’s hands, arms, feet and legs as a result of peripheral nerve disease.

CJ Group released on Tuesday a number of photos of the chairman’s hands, feet and legs. The pictures showed contractures resulting from deformities and an abnormally skinny figure due to the disease. The company has told local media outlets that Lee is unable to perform basic everyday functions such as walking, writing and eating without assistance. Lee is currently being treated at Seoul National University Hospital in central Seoul.

The chairman was indicted in 2013 for allegedly evading 50 billion won worth of taxes and embezzling 70 billion won of the company’s assets. He was found guilty in his first trial in 2014 and in a retrial last December.