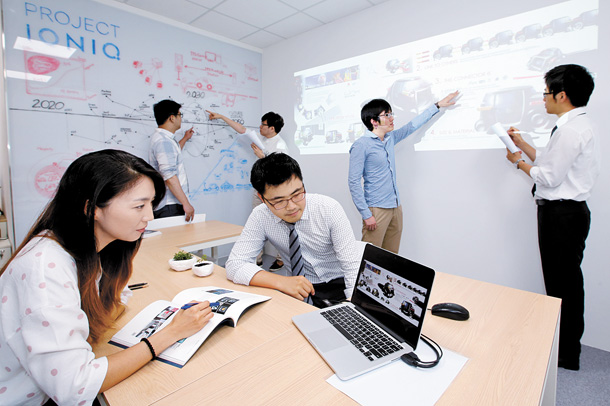 Hyundai Motor started a think tank for future car development on Tuesday, a strategic move by the nation’s largest automaker to lead innovation in the fast changing global automotive industry.

The so-called Project Ioniq Lab is stationed in Pangyo Techno Valley, Gyeonggi, home to many tech start-ups in the nation.

Unlike existing research and development centers like Namyang R&D center, where research for technologies in immediate demand are taking place, the new lab’s focus will be on analyzing future trends of mobility and devising longer-term pictures that could guide future businesses of the automaker.

The lab chose open innovation, which enables companies to use external ideas as well as internal ones to expand the companies’ idea pool and advance their technologies. The lab will be partnering with universities, other research labs and information technology companies to share ideas similar to Silicon Valley in the United States.

A total of 10 researchers led by Lee Soon-jong, dean of Seoul National University’s College of Fine Arts, will be in charge of the operation and project planning of the lab while 10 other specialists in various sectors such as futurology, sociology, engineering and arts will serve as advisory group members to guide the research.

At the lab’s opening ceremony Tuesday, the automaker released the first outcome from the lab’s research, which is an analysis of 12 megatrends that will lead the automotive industry from 2020 through 2030.

According to the report, the world will soon become a hyper-connected society where information processing and sharing will become extremely fast, not only between machines but between people and things.

The lab also predicted an aging society, where people 65 and older will account for more than 20 percent of the world’s population. “New means of mobility for the old, such as robots and wearables will be introduced,” the company said in a statement.

The sharing society, represented by ride-hailing services like Uber, will rise, while artificial intelligence may play a bigger role in transportation.