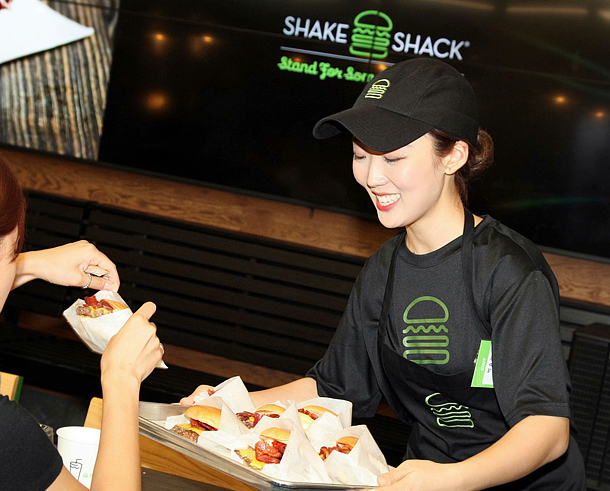 Shake Shack began in 2001 as a burger and hot dog joint in New York’s Madison Square Park. It was the brainchild of Danny Meyer, CEO of Union Square Hospitality Group which operates several restaurants in New York.

“When I encountered a Shake Shack burger five years ago, I was mesmerized by not only its amazing taste but also the staff’s warm hospitality and vibrant mood,” Hur Hee-soo, SPC Group executive managing director, said at a media event on Tuesday at the soon-to-open Gangnam branch.

SPC, a leading food and bakery chain in Korea that operates Paris Baguette, Baskin Robbins and Dunkin’ Donuts, is an official local partner.

“The brand mission of Shake Shack, ‘stand for something good,’ and our own, ‘the best way to happiness,’ have something in common,” Hur said. “And by collaborating, we believe we can make a bigger synergy.”

Hur began building a partnership with Shake Shack CEO Randy Garutti five years ago. With SPC taking over local management of the franchise, the Gangnam branch will be Shake Shack’s 98th location in the world.

“This is a dream come true for me as well as Shake Shack,” Garutti said. “We never opened a restaurant here.”

Shake Shack currently has over 90 branches in 13 countries. In East Asia, the franchise has two branches in Japan, and the one in Korea will be its third.

Shake Shack said it is planning to open a second branch in Seoul within this year, but a specific neighborhood has not yet been decided. By 2025, it plans to open 25 branches in Korea.

Ever since SPC officially inked an exclusive license deal with the international burger franchise in December 2015, even the smallest progress has made headlines, drumming up anticipation among local foodies.

SPC and Shake Shack will provide the entire classic menu including the flagship Shack Burger, which is equivalent to a cheeseburger, as well as the Smoke Shack with smoked bacon and the vegetarian ‘Shroom Burger with a mushroom patty. Hot dogs and crinkle-cut fries are also on the menu.

Shake Shack has been introducing localized menus whenever it enters a new overseas market. For Korea, it has added a milkshake made from red beans and four types of frozen custards made from local ingredients.

The burgers’ core ingredients, such as Angus beef, cheese and sauce, will be directly delivered from the United States, while fresh ingredients such as lettuce and tomatoes will be locally supplied.

The franchise has also developed a partnership with local breweries Magpie Brewing Company and the Hand and Malt to provide craft beer to Korean customers.

The Shake Shack branch in Gangnam District will serve its first burgers on Friday starting from 11 a.m. and will be open until 11 p.m.