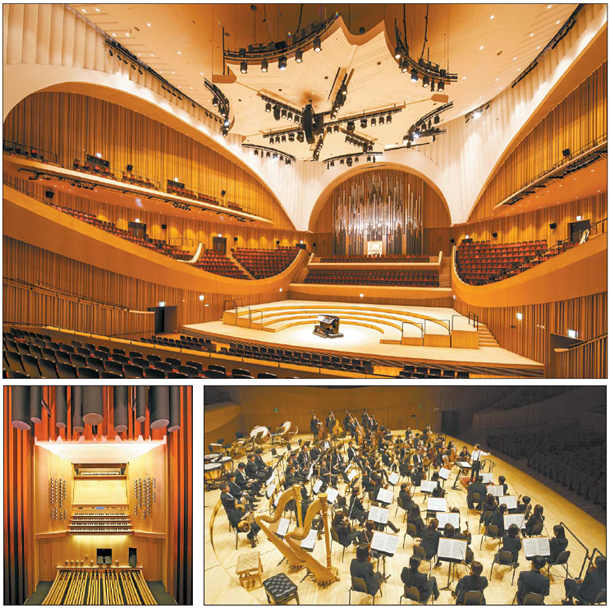 Top: The state-of-the-art Lotte Concert Hall inside the Lotte World Mall in Jamsil, southeastern Seoul, will officially open on Aug. 18. The venue is designed for classical music and seats 2,036 people. Left: Lotte Concert Hall houses the country’s largest organ, with 4,958 pipes. Right: The Korean Symphony Orchestra, under the baton of maestro Lim Heon-jung, staged the 14th and final pre-concert on July 1 at the new venue before it officially opens. [LOTTE CONCERT HALL]

There’s still about a month left until the official opening of the Lotte Concert Hall inside the Lotte World Mall in Jamsil, southeastern Seoul, but a series of controversies have made the venue eager to prove it’s ready for an audience.

As a result, the hall has been staging a series of invite-only concerts across a wide range of genres before the first official baton drops Aug. 18.

The final concert - and the 14th in the series - came on July 1, when the Korean Symphony Orchestra took the stage. As maestro Lim Heon-jung signaled the start of “Schumann’s Cello Concerto,” the sound of the orchestra gushed up towards the ceiling, then trickled down to the ears of everyone sitting in this unique vineyard-style concert hall.

To this reporter, who was sitting in the back row on the first floor of the state-of-the-art venue, the sound of the instruments was as delicate and beautiful as expected.

Unlike regular box-shaped concert halls, where the sound is best at the center, acoustics experts say the ideal spots at Lotte Concert Hall are along the rear rows. But the difference isn’t huge, meaning that unless you’re an audiophile, you’ll still get quality sound wherever you’re seated.

That’s because the venue is designed to make sure everyone in the audience experiences the same resonance regardless of their seat, said Park Se-whan, director of DMB Architecture. Park worked with Toyota Yasuhisa, a renowned acoustician whose projects include the Walt Disney Concert Hall in Los Angeles and Suntory Hall in Tokyo, to design the Lotte Concert Hall.

“The whole concert hall is, in fact, designed like a large musical instrument,” said Park. “The sound beautifully resonates inside this hall while perfectly blocking outside noise.”

Located on the 7th to 11th floors of the Lotte World Mall building, which is the country’s tallest, Lotte Concert Hall is finally ready to greet the public with “the best-sounding music,” says Han Kwang-kyu, the venue’s CEO.

Like its owner, Lotte Group, which has been facing the music from a well-publicized family feud, Lotte Concert Hall has also been wrestling with various problems that delayed its opening for a year. In 2014, Kim Eui-joon, former CEO of Lotte Concert Hall, said it would open September 2015, with maestro Chung Myung-whun, former artistic director of the Seoul Philharmonic Orchestra, staging the first concert. But after a construction worker fell to his death while working inside the venue in December of 2014, everything ground to a halt.

“Companies all operate for profit, but I thought that the new concert hall was, at least, intended as a social contribution,” Kim told local reporters in March. “We were at odds on many issues and I decided to resign because I don’t think I can ever satisfy the group.” Lotte quickly found Han to take the post. Despite the troubles, the 2,036-seat venue is, without a doubt, the most high-end classical concert hall in the country.

Behind the stage, it also houses the country’s largest pipe organ, with 4,958 pipes. Still, classical music critics say the venue is not on the same level as acoustician Yasuhisa’s other renowned designs.

There were also some problems with the seating. The equal resonance means seats can be anywhere, so there are spots directly above the stage looking down. But this makes the people seated there prominently visible, which can interrupt concentration on the orchestra. In fact, when this reporter attended the recent concert, a young woman with long hair was sitting in one of those seats. She began to doze off in the middle of the concert and her long hair dancing side to side was a major disturbance.

According to Han, the venue has been gathering feedback from critics and audience members during the early concert series, which included jazz and gugak (Korean traditional music) performances. “Our team will make a few improvements according to the comments until the official opening next month to present the best sounds to the public,” said Han.

Although the venue is designed for classical music, Han said that he was surprised by the gugak performance.

“I was surprised by how beautiful the traditional Korean instruments sounded here,” said Han. “I think because the hall is designed to give the best resonance, it’s perfect for any concerts that don’t use microphones.”

Although most of the performances lined up until the end of the year are classical, Han said he’ll add in gugak concerts next year to “allow even laymen to find beauty in our traditional music, just like I did.”

According to Han, his goal is to get Lotte Concert Hall recognized as not only the best concert hall in Korea, but also across all of Asia.

“The venue not only offers quality sound, but the whole atmosphere outside the concert hall will give visitors a whole new cultural experience,” said Han, adding that he’s looking into allowing longer intermissions for some performances so that audiences can enjoy the garden right outside on the 7th floor.

The opening concert on Aug. 18 will be staged by Seoul Philharmonic Orchestra under the baton of the orchestra’s former artistic director and principal conductor Chung. For more information about upcoming concerts, visit www.lotteconcerthall.com.