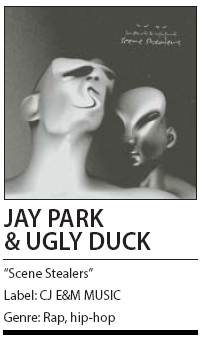 True to its name, this latest EP by Jay Park, head of the hip-hop label AOMG, and his artist Ugly Duck steals the show.

It features six tracks, including collaborations with AOMG’s renowned producers and artists including LOCO, Gray and Simon Dominic.

Each are distinctive, but title tracks “Ain’t no Party Like an AOMG Party” and “Put ’Em Up” are the real standouts.

On the EP, rappers Park and Ugly Duck seem focused on showing their uniqueness and identity as artists by borrowing from a wide range of hip-hop subgenres.

The music video for “Ain’t No Party” is worth checking out, too. It features the breakdancing Gamblerz crew and street dancer Triz performing jaw-dropping moves in funky makeup that nods to the upcoming movie “Suicide Squad.”

The album will be particularly interesting to fans who enjoyed Park’s digital single “Mommae” last year, as it also featured then-unknown Ugly Duck.