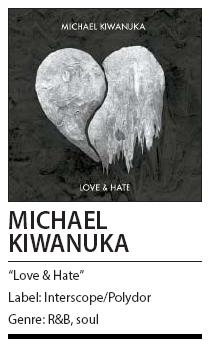 Michael Kiwanuka takes a wide-screen approach to emotional distress on “Love & Hate,” a collection of darting shadows rooted in melody.

There’s a cinematic quality to opening track “Cold Little Heart,” a 10-minute technicolor burst of strings, slide guitar and overdriven choral accompaniment that’s as adventurous as it is engaging. Quentin Tarantino would turn it into a three-hour film with a Hollywood ending.

Most of the album’s 10 songs are rooted in Kiwanuka’s acoustic guitar and warm, expressive voice. It’s a solid foundation for the souped-up arrangements and can even bear with grace the heaviness in the shame, deception, loss and hurt of the lyrics. “Love & Hate” confirms Kiwanuka, a son of Ugandan immigrants, as a major talent whose soul-scouring search is well worth following. AP