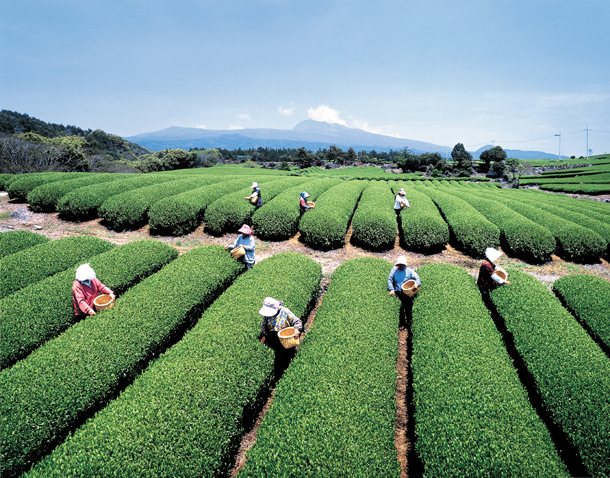 AmorePacific has been putting various efforts into improving the value and quality of Jeju Island’s green tea. Its tea laboratory has been doing research on cultivation, breeding and processing of green tea in the region. [AMOREPACIFIC]

Innisfree Moeum Foundation announced last week it will invest 10 billion won ($8.8 million) in projects on Jeju Island over the next five years.

The foundation, which was created by AmorePacific Group affiliate Innisfree, will invest two billion won annually beginning this year.

The project is a part of AmorePacific Group’s broader plan to invest 100 billion won in businesses on Jeju Island, which the group announced after establishing the Second Jeju Center for Creative Economy and Innovation.

Innisfree Moeum Foundation, established in November 2015, is organizing activities to preserve the environment, vitalize cultural content and foster future global talents in the Jeju region. It will focus on its four projects: “Oreum Book Project,” “Creation of Ecological Forest,” “Creation of Cultural Village” and “Scholarship Project.”

To preserve oreum (volcanic cones in the Jeju dialect) of various sizes and inform people of their ecological value, Innisfree Moeum Foundation is starting “Oreum Book Project.” In cooperation with professionals including botanists, geoscientists, social ecologists and photographers, the project will analyze and explain the vegetation and soil quality of different oreum around Jeju Island.

The foundation will also operate the “Creation of Ecological Forest” project. The project will select a former landfill site and transform it into a forest by planting trees, landscaping and establishing walking paths. Various efforts to restore the ecological system will be carried out in order to foster a sustainable future for Jeju Island.

In addition, activities to transform areas such as the island’s old downtown area, the Yusu creek and villages into tourist attractions are taking place under the “Creation of Cultural Village” project.

The villages, Songdang-ri and the Dongbaek (Camelia) Town, are being promoted through an agreement known as the “Aritaun Purchase,” through which AmorePacific Group is offering local businesses help, while also purchasing natural products from the villages for use in its own cosmetics.

The foundation’s “Fellowship Project” aims to foster future talented young agricultural workers on Jeju Island. In order to vitalize and bring technological innovation to the agricultural industry, the foundation will cooperate with institutions specializing in agriculture to provide educational programs. It will also support outstanding students with scholarships and a trip to agriculturally advanced countries.

AmorePacific Group’s ties to Jeju date back to 1979, when late founder Suh Sung-hwan transformed an infertile part of the island into a green tea farm for its Osulloc brand.

In celebration of this, the group opened the Osulloc Tea Museum in September 2001. The museum is Korea’s very first dedicated to tea, as well as an eco-friendly rest area.

The museum hosts a variety of events such as traditional tea culture experiences and the annual Osulloc Tea Festival, and it attracts 1.6 million domestic and foreign visitors every year.

In March 2013, Osulloc opened the “Tea Stone” pavilion next to the museum, which was built to preserve and promote Korea’s tea-related traditions. Visitors are welcome to drop by Tea Stone to participate in tastings of fermented and blended teas, sample traditional confectioneries and learn to prepare traditional baths.

AmorePacific plans to devote further efforts to introducing Korea’s outstanding tea culture and the beautiful natural environment of Jeju Island all around the world.