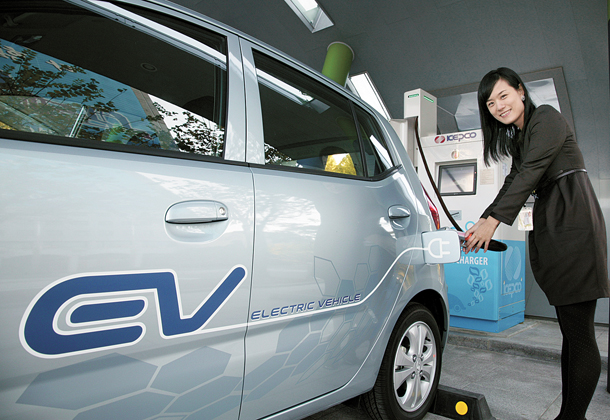 As a result of work done at the smart grid test site on Jeju Island, charging equipment for electric vehicles was developed and 18 charging stations were installed at the site. [KEPCO]

The event was attended by many from KEPCO as well as local government officials.

By utilizing the results of the company’s smart grid test site on Jeju Island, the project hopes to spread the technology throughout the country by 2018. It aims to reduce electricity bills by encouraging people to use electricity efficiently, and help federal and local governments to reduce greenhouse gases and invigorate local economies.

Smart grid is an electric power network that uses the latest information and communications technology to become an intelligent network capable of providing high-quality power and maximizing the efficiency of energy used.

It was first developed at the test site on Jeju, which was located in the northeastern Gujwa-eup area and active from December 2009 to May 2013.

In the Smart Power Grid sector, the test site led to the development of a two-way electric power transmission and automatic failure restoration system that could communicate with the state-of-the-art electronic appliances to control electric power elements. Real-time monitoring of the electrical substation system was also made possible through the development of an intelligent electronic device installed at substation facilities.

In the Smart Place sector, the test site showed how real-time rates of electricity use could be measured, and electric power could be controlled, through a smart meter using Advanced Metering Infrastructure (AMI), a two-way interaction system. The smart meter provides real-time information such as the amount of electricity used, electricity consumption of each devices and power failures.

In the Smart Renewable sector, it led to the improvement of the quality of electricity produced by renewable energy sources such as wind and solar and to ensure a stable electricity output despite weather changes that vary wind speed and the amount of sunshine. The test site generated 260 kilowatt of additional renewable energy, putting the total generated on the island at 1,670 kilowatts.