‘Connect Korea to the Silk Road through the Yellow Sea’

‘Connect Korea to the Silk Road through the Yellow Sea’ 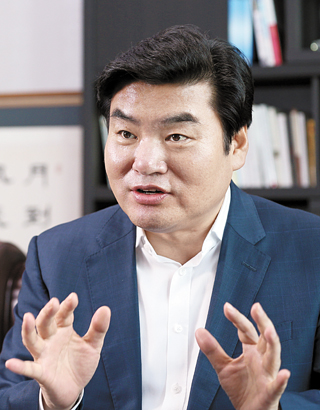 “Let’s board a freight train on a ship to cross the Yellow Sea. Then, through China and the Trans-Siberian Railway, we could reach Europe,” says Rep. Won Yoo-chul, a Park loyalist, who served as floor leader of the ruling Saenuri Party until the April 13 general election. He has been pushing forward a project to connect Korea to the Silk Road via a “train ferry” through the Yellow Sea.

At a glance, the plan may sound unrealistic, but the system has been used by a number of countries including Sweden and Norway from early 20th century. It saves logistics costs and time in supplying goods between Korea and China, since the two countries are directly connected through the route. Some even say the new system may open up doors to North Korea.

Q. What is the reason for your pushing forward the Korea-China rail ferry business?

A. Because it is the only available option to fulfill one of the Park Geun-hye administration’s major projects, the “Eurasia Initiative.” The project is based on the idea that Korea can form its own Silk Road that connects Busan, North Korea, Russia, China, the Middle East and Europe. President Park suggested the idea on October, 2013. But the project is stuck, as it cannot pass through North Korea after its nuclear provocations froze up relations between the two Koreas. We need an alternative route. So I thought of the Yellow Sea. If we load trains on a ferry from Pyeongtaek, Gyeonggi, to reach the Port of Yantai in Shandong Province of China and then connect the loaded train to China’s TCR, we can reach Europe from Korea in a week.

There’s controversy over the departure point. Some claim Incheon is the best starting point.

The bridgehead to the Yellow Sea is Pyeongtaek, without question. Already a car ferry route bound for China’s Yantai Port is established from the Pyeongtaek Port and over 5,000 cars are either imported or exported on the route. Also, a 20-kilometer (12.4-mile) industrial railroad that will connect Pyeongtaek Station and the port is under construction. The result is an outcome of three minister and vice-minister meetings held over three years between the Ministry of Foreign Affairs, the Ministry of Oceans and Fisheries and the Ministry of Land, Infrastructure and Transport.

Prominent lawmakers from the opposition party such as Jung Se-kyun, chairman of the National Assembly, agreed to the validity of the plan and helped me win a 700 million won ($615,555) budget for the plan’s validity test. The test, ultimately, proved economically feasible.

You also suggested a route connecting Pyeongtaek to Gangneung then reaching eastern Russia through the East Sea.

Korea is in the same situation as islands isolated at sea. Along with the ferry route on the Yellow Sea, the route connecting the East Sea and Russia is necessary for the country. If Korea is connected with China and the Trans-Siberian Railroad, a massive ring lying east and west of the Korean peninsula can be formed.

This ring will enable our country to enter the European and Asia markets, which account for 70 percent of the world’s population and 40 percent of the world’s land space. This way, we are connected to the land without passing through North Korea. The change may bring the North to open up doors, since it becomes little meaning for the country to have its doors closed when the South can reach out to other lands without the help of North.

If the relationship with the North is recovered and we can connect to other continents via land routes, would the ferry route still prove economical?

If we are to reach the southern part of China or Europe, the ferry route on the Yellow Sea is still more advantageous. It takes a week from Pyeongtaek to Europe through China and the Middle East.

On the other hand, if you take the route following the eastern coast of Korea taking the Trans-Siberia Railroad to Europe, it will take at least 10 days. The ferry route is four days ahead and it is that much more competent. Adding to that, since the relationship with the North is always subject to change, the ferry route is necessary even as kind of insurance.

With the decision to deploy the Terminal High Altitude Area Defense weapon (Thaad) system, China has been hinting at the possible retaliation against Korea. Is there a chance the ferry route could be victimized?

China has been an active advocate for the ferry route.

The route is a win-win for both Korea and China. I can say there is no possibility of China cancelling the ferry route due to political and military reasons.

Did the Park Geun-hye administration provide any support for the project?

The Ministry of Oceans and Fisheries has applied construction of the ferry docking facility at Pyeongtaek Port as one of its basic plans.

The Ministry of Land, Infrastructure and Transport also has plans laid out for railway construction that connects Pyeongtaek and Gangneung. The Korea-China ferry rail project is already confirmed by the government. Construction could begin as early as next year with completion due around 2022.

Word spread that you would run for Saenuri Party’s convention, but you decided not to run for candidacy.

This year’s party convention is an important event to elect representatives of the party who will lead next year’s presidential campaign. Disputes between factions within our own party cannot be repeated as it was the major cause of our loss in the latest general election. The convention needs to be a plus to our party and should be able to lay out a new vision for the future. I wasn’t sure if I was the one capable of leading that favorable structure within our party. I decided I should have some time to reflect.

Whether Rep. Suh will choose to run the party convention is his decision. My non-candidacy is irrelevant to his choice. As far as I know, he hasn’t yet decided whether to run or not.

You were considered a neutral lawmaker. But as the party leading lawmaker Yoo Seong-min was named a party traitor last year and was expelled from the party, word spread that you became a Park loyalist.

I wasn’t a Park loyalist. But if you become a floor leader of the ruling party, you have to cooperate with the president to run the government. It is unreasonable for a party representative and the president to fight. I only tried to communicate and be more cooperative and to call that being a “Park loyalist” is too much.

But you stood up for President Park as floor leader when the factions were fighting over nominations at the April general election.
No, I just played the middle man and tried to mediate struggles between Lee Han-koo then the head for the nomination committee and then the party chief Rep. Kim Moo-sung.

I even hosted dinner gatherings between Kim, Lee and Rep. Suh Chung-won, who played the role of senior person present among Park loyalists. Then Kim, who said he would participate, suddenly missed the dinner. If that meeting had gone well, the nomination issue would have been settled well enough.

Why do you think Kim missed the dinner?

I guess it was due to disappointment and anger on Lee Han-koo, head of the nomination committee.