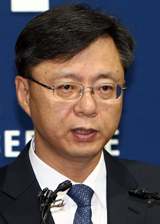 A civic group formally asked the prosecution Tuesday to launch an investigation into Woo Byung-woo, the senior presidential secretary for civil affairs, over a suspicious properties deal involving his family, the game company Nexon and a corrupt prosecutor.

Spec Watch Korea filed a petition to the Seoul Central District Prosecutors Office to investigate Woo, Prime Minister Hwang Kyo-ahn, Nexon co-founder Kim Jung-ju and former Nexon Korea CEO Suh Min. The petition was based on an exclusive report by the Chosun Ilbo that Woo had received favors from Jin Kyung-joon, the senior prosecutor mired in a major bribery scandal, for the sale of Woo’s family real estate to Nexon in 2011.

Woo’s wife and sisters-in-law inherited some real estate near Gangnam Station from their father in 2008. After unsuccessful attempts to sell it, Nexon purchased the land for about 132.5 billion won ($116.5 million). The newspaper said the sale was allegedly a godsend for Woo and his family, because they were looking to sell it in order to pay some 50 billion won in inheritance taxes.

The civic group accused Woo of abuse of his power and obstruction of justice. It said Woo supported Jin’s promotion in the prosecution in return for his arrangement of the real estate sale between his family and Nexon. In a separate but related probe, Jin was accused of receiving massive bribes from the country’s largest game developer. He was suspected of making profits of about 12.6 billion won through shady stock deals of Nexon. 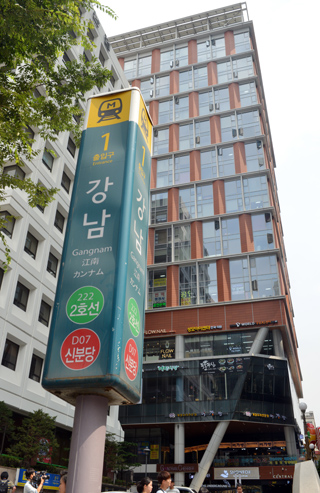 The building near Gangnam Station, which is implicated in a suspicious property deal involving the family of Woo Byung-woo, the senior presidential secretary for civil affairs. [JEON MIN-GYU]

It also said Nexon’s Kim and Suh should be investigated for having provided bribes to Woo by purchasing the land. They were also accused of incurring about 17.7 billion of loss to the company with the purchase.

The civic group also said Prime Minister Hwang, who was the justice minister at the time, should also be investigated for having failed to oversee the prosecution.

Despite his rejection of the Chosun Ilbo report, another scandal involving Woo was published Tuesday. The Kyunghyang Shinmun reported that Woo had defended a corrupt businessman when he was briefly working as an attorney before joining the Park Geun-hye Blue House. The report said Woo worked as a defense attorney of former Nature Republic CEO Jung Woon-ho in 2013 and 2014.

Jung, head of the cosmetic company, was embroiled in an illegal gambling scandal last year followed by a string of additional violence and lobbying charges this year. Woo, along with another prosecutor-turned-lawyer Hong Man-pyo, worked for Jung, the newspaper alleged. Woo and Hong both left the prosecution in disgrace after their investigation into former President Roh Moo-hyun ended with his suicide.

In 2014, President Park Geun-hye named him as her civil affairs secretary. In 2015, he was promoted to the senior secretary of civil affairs at the Blue House.

Woo issued a press release and denied the report. Calling the Kyunghyang Shinmun’s report “100 percent false” and “fiction,” Woo said he will take legal action against the newspaper.

As the integrity of the prosecution was tainted with a series of disgraceful scandals, Justice Minister Kim Hyun-woong issued an apology on Monday. The statement was made before the lawmakers of the Legislation and Judiciary Committee of the National Assembly.

The liberal opposition parties, however, continued to pressure Woo to resign. They also demanded President Park issue an official apology.

“If Woo is keeping his post at the Blue House, it is hard to investigate him properly,” said Rep. Woo Sang-ho, floor leader of the Minjoo Party of Korea, said. “This is an issue involving one of the most powerful officials of the country, so the president must say publicly how it will be handled.”

“This is a matter of this administration’s integrity,” he continued. “The people will judge the president’s will to fight corruption based on her handling of this case.”

He also said an independent investigation body specializing in the corruption and irregularities of top government officials should be established, stressing that no one can have faith in the government’s reform efforts in the aftermath of recent scandals.

Rep. Park Jie-won, floor leader of the People’s Party, also said the president must reshuffle her cabinet and Blue House secretariat in order to “remove all the aides who blind and deafen the president.”

The Blue House, however, dismissed the opposition parties’ demand. “The president and the government are doing their best to overcome the security and economic crises,” a Blue House official said. “Amplifying groundless rumors is irresponsible, and we should all refrain from political attacks.”