Team Korea tees off this weekend at UL Crown

Team Korea tees off this weekend at UL Crown 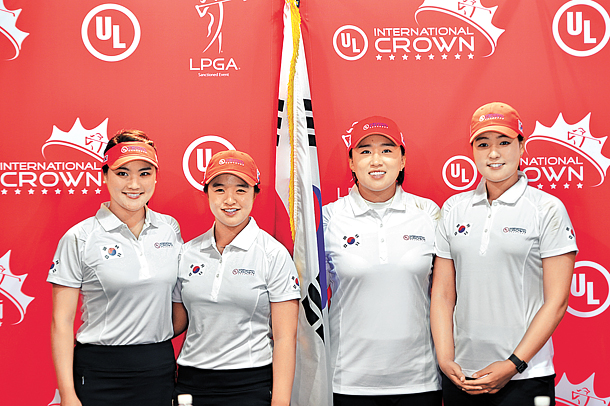 Consider it a prelude to the Summer Olympics. The second UL International Crown, a biennial LPGA match-play tournament in which eight teams representing eight countries vie for the title, starts Friday at the Merit Club in Gurnee, Illinois, just two weeks before the Games open in Rio.

Of the 32 golfers playing in the tournament, 16 are also participating in the Olympics, where golf is returning for the first time in more than a century.

Four Korean women, three of whom will be heading to Rio next month, will also be participating in this weekend’s tournament, as they hope to make up for their disappointing loss during the inaugural UL International Crown in 2014.

The top-seeded Korean team is assigned to Pool A along with China, Taiwan and Australia. Kim Sei-young (ranked world No. 5), Amy Yang (No. 7), Chun In-gee (No. 9) and Ryu So-yeon (No. 12) will play against China on Friday, Taiwan on Saturday and Australia on Sunday in two fourball (best-ball) matches against each team.

A total of five teams will play one singles match to decide the winner on Monday.

Korea is without its top-ranking golfer, Park In-bee who is ranked world No. 3. But even in Park’s absence, the Korean team is determined to wipe out memories of its disappointing third-place finish two years ago.

It will be especially poignant for Ryu, who was on the team that lost.

“The tournament in 2014 was one of my top five tournaments in my career,” Ryu, winner of the 2011 U.S. Women’s Open, said during a pre-event press conference on Wednesday.

“This is not about golf; this is a festival. To be honest, we were disappointed to finish third, so I am so excited to be back here to have another opportunity [to win].”

For the rest of the squad, this will be their first time participating in the UL International Crown.

In the first fourball match on Friday, Chun and Yang will take on China’s Feng Shanshan (No. 13) and Lin Xiyu (No. 52). Kim and Ryu will then face Yan Jing and Feng Simin, who are ranked 99th and 238th in the world.

“Every match is important,” Ryu said. “We have the best players here, so I hope we can win every match.”