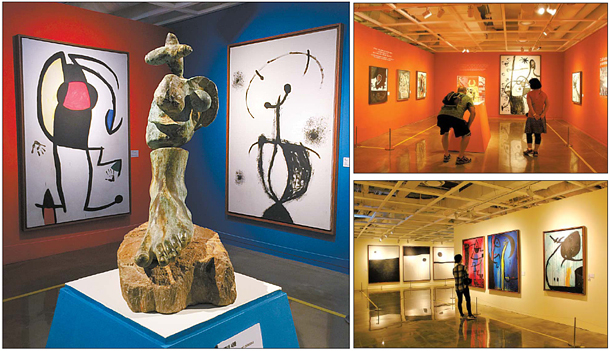 Left: Spanish modern art master Joan Miro’s sculpture “A person and Birds” along with his paintings are on display at the Sejong Center in central Seoul as part of a large-scale retrospective that focuses on his last three decades in the island of Majorca. Top: The exhibition’s first section focuses on his inspiration from primitive art. Above: The fourth section features large-scale paintings that show the artist’s exploration into color and form. [MOON SO-YOUNG]

In Seoul, summer is the season for family-friendly, big-scale exhibitions that mainly feature the works of famous Western modern art masters or artifacts loaned by renowned foreign museums.

This summer is no exception, but art lovers should pay particular attention to “Joan Miro in Mallorca: A Wild Spirit,” now running at the Sejong Center in the heart of Seoul.

The exhibition is exceptional in both scale - 264 pieces of the Spanish master’s paintings, sculptures and drawings - and quality.

It is the first-ever retrospective of Miro (1893-1983) in Korea, according to the organizers.

The exhibits include many large-size paintings, most of which feature bold, powerful lines - seemingly dashed off with a few strokes - paired with fields of strong primary colors and white spaces.

In some, these combine to make pure abstract forms. In others, they create unique simplifications of animals and humans full of primitive energy and humor.

In the paintings, nods to primitive art, Western modern abstract art and East Asian calligraphy are all evident. It seems almost curious, then, that Miro’s art is often categorized as Surrealist in textbooks. His almost-abstract paintings full of vigor and cheerfulness are quite different from representative Surrealist works by Salvador Dali and Max Ernst, which are figurative and imbued with an ominous and lethargic air.

“Miro was inspired by diverse art - not only European Surrealism but also American Abstract Expressionism, primitive art and East Asian calligraphy,” Francisco Copado, director of the Pilar and Joan Miro Foundation, said at the Sejong Center in a press meeting late last month.

“He didn’t want his works to be categorized as any of these [movements],” he continued. “He created his own new art based on inspirations [from] all of [them].”

The exhibits are part of the collection of the foundation based in the scenic Spanish island of Majorca, where the artist spent the last three decades of his life and created many works.

Miro’s mother and wife were also from the island, according to Pilar Baos, coordinator of exhibitions at the foundation and curator of the Seoul exhibition.

“Miro’s Majorca period (1956-81) is the most vital and artistic stage, the least known and the most innovative of his career,” Baos said.

The exhibition is divided into five sections.

The works in the second section are all paintings containing hieroglyphic-esque symbols between images and text, and they draw from American Abstract Expressionism and East Asian calligraphy.

The third section focuses on Miro’s inspiration from the nature of Majorca. It’s a re-creation of his Sert studio in the island, including his real painting tools and other artifacts as well as some of unfinished pieces.

The fourth section features works that illustrate the artist’s exploration into color and form.

In the fifth section, paintings and sculptures show the artist’s unique way of simplifying natural motifs including celestial bodies, animals and humans.

Meanwhile, the representatives of the foundation said Miro had strong links to Korea through his friendship with musician Ahn Eak-tai, who composed Korea’s national anthem.

After conducting many European orchestras, Ahn settled in Majorca directly after World War II. According to Joan Punyet Miro, historian and the artists’ grandson, the artist’s house was only 100 meters (328 feet) from Ahn’s own.