BewhY wins by staying true to self

BewhY wins by staying true to self 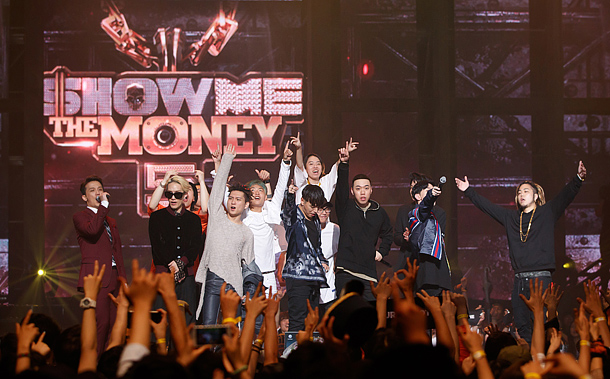 Competing rappers and the producers who coached them cheer together on stage during the final show of “Show Me the Money 5,” a survival hip hop music show on Mnet. The show ended last week with BewhY, (center, wearing a black long-sleeve shirt) winning the competition. [CJ E&M]

Whoever argues that honesty doesn’t pay has clearly never heard of BewhY.

The young rapper, who recently won Mnet’s hip hop survival audition program “Show Me the Money 5,” has shot to fame with his self-reflective tracks that draw on both his history and faith.

In the commercial landscape of Korean hip-hop, that might not seem like a recipe for success. But according to fellow rapper Simon Dominic, who worked as BewhY’s producer on the show, it was that heartfelt approach that led his win.

“He has a swag only BewhY can show,” said Dominic during a press conference Tuesday with BewhY in southern Seoul. 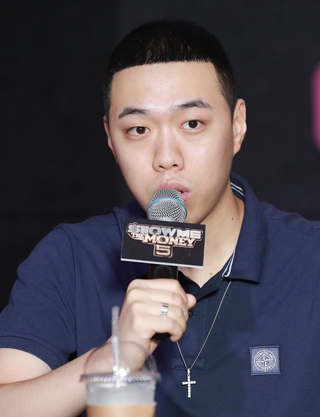 He added that the rapper’s music had the unique ability to speak to listeners’ experiences without using any controversial lyrics or language.

“It was a good kind of hip hop that I hadn’t heard in a while, and I think that’s one reason why his music is widely popular.”

BewhY first dreamed of making music in middle school. He soon decided to adopt a stage name like G-Dragon of Big Bang, so he started calling himself BY after his initials. He later changed the spelling, fearing the name wasn’t deep enough.

“I added more meaning with the help of C Jamm,” he said, referring to his childhood friend and rival contestant on the show.

The rapper sat down with reporters to share more about his experience on the show, which began in May and originally received around 9,000 applicants.

A. The show was a blessing for me. I’m so thankful for the other [contestants] who have made good songs and performed well. I’m also thankful for my team.

I spend so much time with them making songs that I see them more than my own family. The process that led to the win is more precious than the win itself.

How was it like to compete against your childhood friend C Jamm on the same show?

Even before we started, we said, “Let’s meet each other in the final round. And by the final round, we had made the show look just as we’d wanted. [The two were the final contestants.] We told each other how happy we were. We were friends, not rival rappers back in high school, and I felt so happy that we had set the same dream and both made it to the final.

Why do you think that your songs released on the program have also been popular on music streaming services?

I think hip hop can absorb many things, so it can harmonize well with many different genres. I think that’s why [my songs] have appealed to many. I didn’t make songs expecting they would become hits. We just made the music we wanted to make, in the styles we wanted to use. I’m just happy that we got rewarded for our efforts.

Did you include religious lyrics on purpose?

I’m Christian. I didn’t intend to make religious music, but I just value that in my life. I just wanted to include my story, my thoughts and my values in my music. Some may feel antagonistic about religious content, but I just wanted to share my life. So I thought a lot about how to blend my music into something [that can be both acceptable] to the those religious and those not.

What is your plan for your future?

I have not decided anything yet [about which company I want to sign with.] Now is the time to think much. Wherever I go, I’ll show what I got.

Are you doing the free concert that you promised to fans during the program?

Yes. I will make sure I keep my word. I haven’t decided when to do the concert. I want to get started on something and then do a free concert.