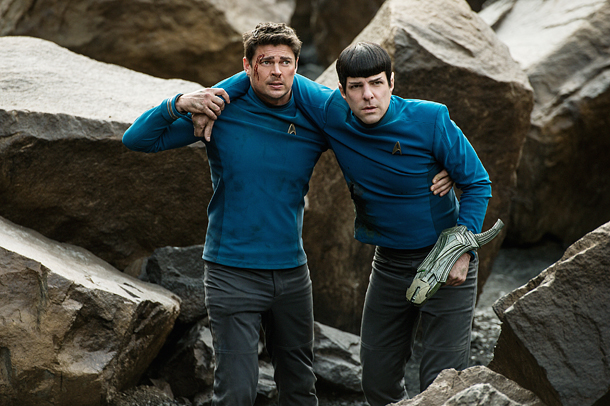 Karl Urban portrays Bones, left, and Zachary Quinto portrays Spock in a scene from “Star Trek Beyond.” This week’s Comic Con extravaganza is expected to draw more than 160,000 fans for high-energy sessions featuring casts and crews from such films and TV shows as “Game of Thrones,” “Star Trek,” “Suicide Squad,” and “The Walking Dead.” [AP/NEWSIS]

“Star Trek” is going to Comic-Con to celebrate its birthday in a bold way.

The intergalactic franchise is among several long-running entertainment properties scheduled to mark major milestones at this week’s pop-culture extravaganza in San Diego.

The series’ 50th anniversary will be celebrated alongside the likes of the 20th birthday of the spooky video game series “Resident Evil,” the 25th anniversary of the Disney animated musical “Beauty and the Beast” and the 75th year of lasso-swinging superhero Wonder Woman.

In recent years, San Diego Comic-Con has become a go-to destination for Hollywood to celebrate _ and promote _ its most established entertainment properties to the more than 160,000 fans in attendance (and everyone else following the action online).

“We’ve been to all sorts of sci-fi and ‘Trek’ conventions, but Comic-Con is an entirely different beast,” said Rod Roddenberry, son of the late “Trek” creator Gene Roddenberry and president of Roddenberry Entertainment. “With so many different kinds of fans in attendance, it just made sense for us to celebrate this big birthday with everyone that goes to this amazing convention.”

The sci-fi series’ anniversary will first be toasted outside the San Diego Convention Center on Wednesday evening with the U.S. premiere of the new film “Star Trek Beyond,” then all week long inside the cavernous venue with several “Trek” talks, including panels featuring lawyers and astronauts inspired by the series.

The festivities will culminate with a Saturday panel on stage inside Hall H, the convention center’s largest space, which will bring together stars from each “Trek” installment. The gathering is expected to feature fans’ first glimpse at a new “Trek” series set to debut next year on the CBS All Access streaming video service.

“We don’t just want to use this opportunity to look behind us in the rearview mirror but also what’s ahead of us in the front windshield, as well,” said Trevor Roth, who serves as COO of Roddenberry Entertainment and an executive producer on the new “Trek” show.

Other properties celebrating hallmark birthdays include the 20th season of “South Park,” the 75th anniversary of Archie Comics and the 30th anniversary of “Aliens.” The cast and crew of the sci-fi sequel, including actress Sigourney Weaver and director James Cameron, will be on hand for a Saturday panel.

“We’re actually only a few days off from the actual 30th anniversary, so the timing could not be more perfect,” said “Aliens” producer Gale Anne Hurd. “It’s interesting that the film still holds up after all these years. At a time when almost everything we see on screen is a computer-generated visual effect, almost everything in ‘Aliens’ was created using practical effects.”

Nickelodeon is hosting an after-hours event outside the convention center to celebrate the 30th anniversary of the slime-covered kids’ game show “Double Dare.” The show’s original host will return to the podium for the first time in 16 years to lead a special episode that will be streamed live on Facebook.

“When the phone call came from Nick, the answer to do it was ‘absolutely,”’ said “Double Dare” host Marc Summers. “I didn’t have to think about it. ‘Double Dare’ was the show that put me on the map, and the fans have been extremely loyal throughout the years. Why wouldn’t I stand behind that podium again?” AP