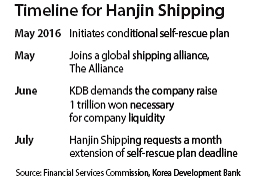 Indebted Hanjin Shipping is busy scraping together cash to secure liquidity by Aug. 4, and with the company’s creditors refusing to contribute any more to the shipping line, Lee Dong-geol, chairman of main creditor Korea Development Bank (KDB), has stressed that the money needs to come from Hanjin Group Chairman Cho Yang-ho himself.

“To bring back Hanjin Shipping to life, Chairman Cho Yang-ho needs to take the risk and make up his mind,” Lee said in an exclusive interview with the JoongAng Ilbo on Monday.

It is the first time Lee has directly named Chairman Cho as responsible for coughing up funds to support the troubled shipping company. According to a recent inspection of Hanjin Shipping’s finances, the company needs over 1 trillion won ($870 million) to secure liquidity.

Last month, Hanjin offered its creditors a plan to secure up to 400 billion won on its own should creditors cover the rest, roughly 600 billion won. However, the offer was rejected.

“The company needs to fund itself by all means,” Lee said, adding that creditors have considered the case of Hyundai Merchant Marine (HMM) as an example. “HMM succeeded in company normalization without receiving a penny from its creditors.”

Lee said he has set a rule to “forbid new funding” for companies under restructuring ever since he began his term as chairman of the state-run KDB in February.

“I decided not to inject taxpayers’ precious money for major restructuring of companies, and I am still keeping to my principles,” Lee said.

Hanjin Shipping and Hanjin Group have yet come up with a feasible measure to come up with 1 trillion won in funding, but the shipping company has nonetheless pushed ahead with available measures at hand.

It has been selling a host of company assets over the past three months and engaging in charter rate discussions with 22 shipowners of nine different countries from which the company is renting ships.

In May, Hanjin Shipping sold its holding shares of H-Line Shipping along with its bulk vessels and a part of its Tokyo headquarters. In June, it also sold part of its sea route operation rights worth 62.1 billion won.

Since Tuesday, the company has been in meetings with a global shipping alliance called The Alliance. During the discussions in Hong Kong, the six members of The Alliance, all of which signed a binding contract in May to jointly operate major sea routes by April 2017, have been working through lines that can optimize the members’ shipping networks.

“We will put our best efforts into maximizing synergy among the member companies and offer a wide range of shipping schedules, secure the punctuality of shipping services and cut operation costs,” a Hanjin Shipping spokesperson said Wednesday.

The members will work on establishing an official operations agreement on shipping routes in order to register the alliance with the U.S. Federal Maritime Commission by the end of September.

As Hanjin Shipping strives to normalize company operations, creditors including the KDB are hinting they may delay the original deadline for the company to complete its self-rescue plan.

“The final decision will be made maybe next week, but it is highly likely that the creditors will grant Hanjin another month,” a source from KDB said.

If the deadline is extended, it is expected to be around early September. HMM had earlier been granted an extra month for its self-rescue plan.

Hanjin Shipping has to meet three conditions as part of its restructuring: cut 30 percent of its current charter rates through ongoing negotiations with overseas shipowners; delay the expiration date of its corporate bonds; and join a global shipping alliance.

The last condition has been the only one fulfilled so far. Should Hanjin Shipping fail to meet all three conditions by Aug. 4, it will automatically fall into court receivership.

“It has been Hanjin Group’s historical business philosophy to become a combined logistics company encompassing businesses on land, sea and air [through Hanjin Transportation, Hanjin Shipping and Korean Air],” KDB Chairman Lee said. “I don’t think Cho will give away one of the group’s three business pillars to court receivership.”

While KDB itself has partly been blamed for the insolvency of shipbuilders and shipping companies on the course of restructuring, Lee retorted that, “We have done many things wrong in the past, and we are reflecting on it.”