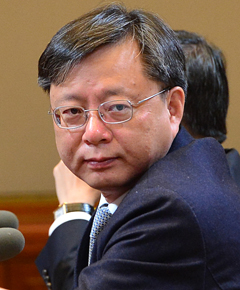 President Park Geun-hye’s scandal-plagued senior presidential secretary for civil affairs resisted snowballing pressure for his resignation, insisting on his innocence in a string of alleged irregularities.

Woo Byung-woo addressed a series of scandals about a dubious real estate deal involving his family, his career as a defense lawyer before joining the Blue House and his son’s special treatment in regards to military duty. “They are all accusations involving people whom I do not know,” Woo said. “And I don’t think a public servant must step down whenever a [groundless] accusation is raised.”

In a meeting with journalists in the morning, Woo flatly denied all accusations against him case-by-case.

Woo faced many allegations over the past week. The Chosun Ilbo reported earlier this week that Woo is suspected of having received favors from Jin Kyung-joon, a senior prosecutor mired in a major bribery scandal, for the sale of his wife’s family estate to Nexon in 2011. Woo’s wife and sisters-in-law inherited the land from their father in 2008, and Nexon bought it in 2011 for about 132.5 billion won ($115.9 million).

While Woo claims he has no relations with Nexon co-founder Kim Jung-ju, Woo and Jin are reportedly close acquaintances, having attended Seoul National University Law School together. Jin is also a close friend of Nexon’s Kim.

Jin was detained earlier this month on charges of insider trading of Nexon shares. He was accused of making a profit of about 12.6 billion won through a deal last year. Kim allegedly ordered his company to lend 400 million won to Jin when he bought 8,537 Nexon shares in 2005.

Woo admitted Wednesday that he attended the signing of the real estate sale to assist his mother-in-law, but denied any illegalities in the deal.

A report by the Kyunghyang Shinmun said Woo defended a corrupt businessman when he was briefly working as an attorney before joining the Park Blue House in 2014. The report said Woo worked for former Nature Republic CEO Jung Woon-ho in 2013 and 2014 without formally signing a contract. Jung was embroiled in an illegal gambling scandal last year followed by a string of additional violence and lobbying charges this year.

Reports were also published saying that Woo was a close acquaintance of Lee Min-hee, a popular middleman in the legal community.

“I don’t know Kim Jung-ju, Jung Woon-ho and Lee Min-hee,” Woo said Wednesday. “I think it is wrong to take responsibility for suspicions involving people I don’t know and something I didn’t do.”

Woo filed criminal and civil charges against the two newspapers. Asked if he will appear at the prosecution for questioning, Woo said he will if he is summoned.

Woo also denied reports that his son was given special treatment while performing his compulsory military duty. Woo’s 24-year-old son is currently serving as a conscripted policeman. Reports said the son was assigned to patrol duty of the government complex in Seoul last year, but reassigned as a driver of the Seoul Metropolitan Police Agency only two months later in violation of regulations governing the conscript police.

“Now that news reports were made about my family and even my son,” Woo said, “I am feeling extremely pained and that is why I decided to speak about my position today to reporters about the accusations.”

The Blue House remained tightlipped about the scandals swirling around its top civil affairs aide. In the later term of Park’s presidency, the role of the civil affairs senior secretary is crucial, particularly because Park loyalists were losing their influences over the ruling Saenuri Party. Firing Woo, therefore, would not be an easy choice for the president.

“The accusations are not targeting Woo, but targeting Park,” a presidential aide told the JoongAng Ilbo. “Unless Woo’s clear wrongdoing is revealed, he cannot step down.”

The senior civil affairs secretary to the president is a vice-minister-level post in charge of monitoring public sentiment, maintaining discipline of public servants, assisting in legal issues and handling civil petitions. The job also includes vetting of public officials.

Rep. Cho Eung-cheon of the Minjoo Party of Korea, who worked in the Park Blue House as the presidential secretary for civil service discipline from 2013 till 2014, said Wednesday that Woo appeared to have supported Jin’s promotion in the prosecution.

“I was told that the vetting team of the Blue House concluded that Jin was not fit to be promoted, but he still won the promotion, so the investigators were surprised,” Cho said in a radio interview. Jin was promoted to director of the Korea Immigration Service last year. Due to the Nexon scandal, he became the first director-level official in the 68-year history of the prosecution to ever be detained for an investigation into corruption charges.

Cho worked in the Park Blue House until April 2014, while Woo joined the secretariat in May 2014. “I have heard widespread rumors that Woo had interfered in appointments of the prosecution and the National Intelligence Service and his associates were given powerful posts,” Cho said.

Asked about the poor vetting process of Jin’s promotion, Woo defended the integrity of the process.

Opposition lawmakers demanded that Woo step down immediately and face a thorough investigation. “I am doubtful that the prosecution can properly investigate the senior civil affairs presidential secretary, who actually controls the prosecutors,” Rep. Woo Sang-ho, floor leader of the Minjoo Party, said. “Even if Woo’s excuses were true, he must step down. He should hot hide behind the president’s skirts.”

Woo also warned that the integrity of the entire Park administration will be shaken if the Blue House tries to protect Woo.

Rep. Park Jie-won, floor leader of the People’s Party, also demanded Park fire Woo immediately. “She must remove the detonator called Woo and reshuffle her cabinet and secretariat entirely in order to stop the lame duck bomb from exploding,” he said.

The ruling Saenuri Party tried to defend the president and her top aide, saying that the public should give some time to prosecutors to investigate the accusations. In an interview with MBC radio, Rep. Kim Jin-tae criticized the opposition parties for attacking the administration.

“Woo must take responsibility after an investigation is concluded, but demanding he step down over mere accusations is not right,” he said.