Seongju residents prepare to take the fight to Seoul

Seongju residents prepare to take the fight to Seoul 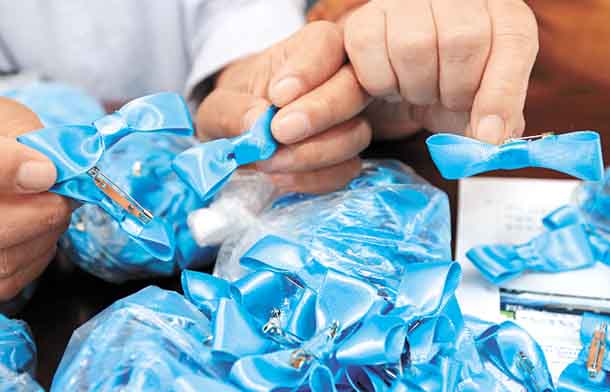 Residents of Seongju County, North Gyeongsang, on Wednesday prepare blue ribbons that will be pinned only on Seongju residents so as to prevent outsiders from joining a planned rally at Seoul Station today. Leaders of the group announced that they would not allow outsiders to meddle in the Thaad deployment issue. Seongju was chosen as the site for the Thaad battery. [GONG JEONG-SIK]

With water bottles and aluminum mats piled to the ceiling of the makeshift tent in the parking lot of Seongju County Office on Wednesday morning, county residents were busy preparing their departure to central Seoul to hold a mass demonstration today against the decision to put the U.S.-led Terminal High Altitude Area Defense (Thaad) system in Korea.

“Just organizing some supplies for the residents to use in the rally at Seoul Station tomorrow,” said a resident as he tied up a couple of mats with ropes.

Some 2,000 residents will be traveling on about 50 buses into Seoul this morning for the rally at Seoul Station, which is planned to be held from 2 p.m. to 6 p.m.

Mr. Kim, a 40-year-old yellow melon farmer, was packing melons into plastic bags in front of his farm in Seongju on Wednesday.

“I’m going to bring some of them to Seoul,” he said.

“And no, they’re not for throwing during the rallies. I am going to offer them to some Seoul residents and show them that Seongju melons are safe [and will be safe] from the Thaad radar.”

Seoul and Washington announced their decision to deploy the Thaad system to Korea on July 8 and last week named Seongju County in North Gyeongsang as the location for the missile defense battery.

This has triggered a strong backlash from Seongju residents, who are concerned over its risks to health and agricultural produce, including yellow melons. Seongju is known to produce some 70 percent of the country’s yellow melons.

The key concern is over the electromagnetic radiation produced by the powerful Army Navy/Transportable Radar Surveillance, or AN/TPY-2, radar.

Seongju residents will wear a blue ribbon to ensure that the rally is not joined or disrupted by non-residents of Seongju.

They have made arrangements with some 200 volunteer body guards from the Korea Taekwondo Association and the Republic of Korea Marine Corps Veterans Association to keep non-residents out of the rally.

Some 100 residents will shave their heads at the rally, and a mass silent rally will be held by residents wearing masks over their mouths.

“We will handout to Seoul residents some 20,000 flyers printed with our plea to the government to withdraw its plans to locate the Thaad system in Seongju,” said Baek Cheol-hyun, co-chairman of a civic committee opposing Thaad deployment in Seongju.

Lawmakers of the Minjoo Party of Korea, the People’s Party and the Justice Party will join the residents at the rally.

Meanwhile, Saenuri Party's Floor Spokesman Min Kyung-wook said at a meeting on Thaad at the National Assembly on Wednesday that he will stand with Defense Minister Han Min-koo in front of a Thaad battery radar once the system is installed in Seongju, to show the people that the radar is safe for humans.

“I will peel a yellow melon from Seongju within the radar’s reach and eat it,” Min said. “And I will take some melons to my mother who loves them.”

As of Wednesday, some 1,200 residents of Seongju who are members of the Saenuri Party had submitted to the civic committee in Seongju their written statements to defect from the party.