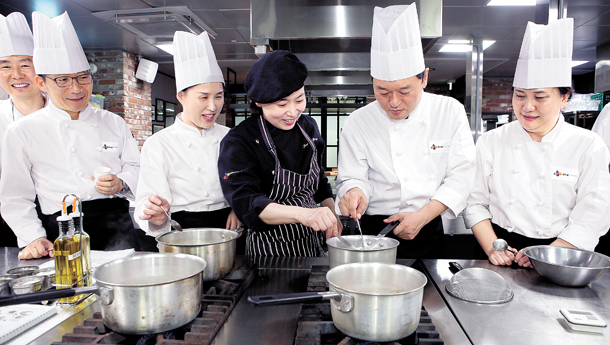 Retirees learn Italian cooking from chef Yang Jeong-soo, center, at the Win-Win Education Center run by CJ Foodville in Seoul on Monday. Anyone interested can apply for the CJ-sponsored program for retirees. [KIM CHOON-SIK]

Lim Ji-seon was at first confident that she could easily find a job to pursue in the second chapter of her life when she began her search in 2014.

Having worked for 30 years at one of the country’s chaebol companies before her retirement in early 2014 at the age of 51, she knew she had what it took to be a competent worker. But it didn’t take long for her to realize there weren’t many companies that wanted her.

In fact none did. She struggled to find a new job for over a year, although she only applied at small and medium size companies. Lim thought she was aiming low by applying only to smaller companies, which would pay her less than what was she used to.

But for those companies, her high qualification was a source of worry that she might soon quit out of disappointment with the lower pay rate.

Then she landed on a temporary job at a daycare center. Not long after she began to work, Lim impressed many of the younger teachers there with her organizational skills. After a three-month internship, she became a regular worker at the end of last year.

“The depression that I had developed during my year-long job search disappeared soon after I started working again,” said Lim, smiling.

Lim’s story is common among baby boomers, most of whom will soon be facing retirement and seeking new positions in a saturated job market in which even fresh university graduates may spend years finding a job.

It is expected that an average of 200,000 baby boomers will retire every year from now until 2021, making the already-tight job market even more competitive.

According to a survey by the Seoul 50-Plus Center run by the Seoul city government, the No.1 concern among silver-haired retirees is whether they can continue their social and productive lifestyles, a concern shared by 62.5 percent of respondents.

The second highest concern, with 29.8 percent of respondents, was the lack of financial preparation.

The dearth of quality jobs for retirees is adding to the many difficulties they face. Government data shows that there are 894,000 middle-age job seekers but only 162,000 job openings for them. Even among the 162,000 openings, 45.5 percent are one-time daily jobs, such as construction labor, followed by simple labor jobs such as cleaning (36.9 percent) and self-employment (26.7 percent).

Experts say that those in their 50s and 60s looking for jobs should make the most of government policies aimed at helping them find jobs again rather than solely relying on their personal networks. One way to start is by visiting re-employment centers run by the Employment and Labor Ministry, they say.

“Without detailed preparation, it is a daunting task for the middle-aged to find a new job. Doing so requires help from career consultants,” said Jung Han-na, a researcher at the Korea Employment Information Service. “The first step in the re-employment process is getting yourself exposed to career information and financial subsidies provided by state-run institutions.”

To help retirees find new jobs, the government provide subsides of up to 70 percent for vocational training fees with an annual limit of 2 million won ($1,751) for each applicant.

Woo Kyung-joo, 56, is a case-in-point who benefited greatly from the government-sponsored reemployment center. Woo began his career at Lotte Group in 1987 and was on the fast track to becoming an executive-level employee there. He excelled in his performance and had his promotion faster than his colleagues in the same age group.

He recalled himself as being “full of confidence.” Then in early 2013, he found himself suddenly laid off by the company to which he had dedicated his 30s and 40s. Woo taught at a university outside of Seoul as an adjunct professor.

But his class was only once a week, far short of what he needed. Then he got a call from the re-employment center to which he had earlier submitted his job application.

An official there told him of a research position in the tourism industry. Woo, with years of work experience at the Lotte World amusement park, applied for the position, proposing he would work to develop products modeled on the mascots of Lotte World.

Two years after he was let go by Lotte Group, he had found a new job.

“If it weren’t for the advice and help of consultants at the reemployment center, this day would have never come,” said Woo.