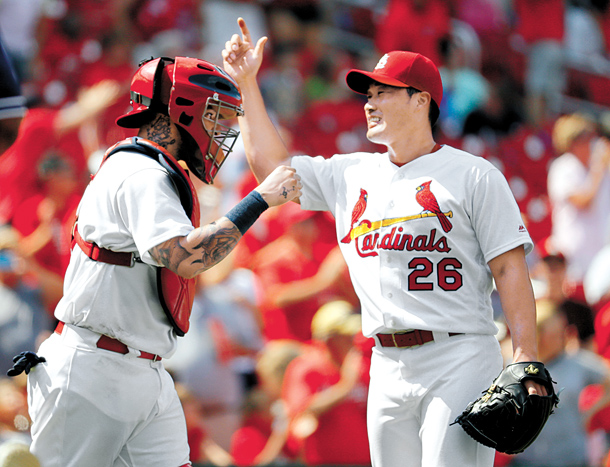 St. Louis Cardinals’ Oh Seung-hwan, right, celebrates a 4-2 victory over the San Diego Padres with catcher Yadier Molina Thursday. Oh earned his third and fourth save against the Padres. [AP/NEWSIS]

While his compatriots in the league are in a quandary due to injuries and involvement in sexual assault allegations, the St. Louis Cardinals’ closer Oh Seung-hwan continues to shine during his rookie season in the Major League Baseball. In his latest success Thursday, he notched his third and fourth saves of the season.

During the doubleheader against the San Diego Padres on Thursday after their game on Wednesday was rained out, Oh tossed a perfect final inning of the two games at Busch Stadium in St. Louis, Missouri. The Cardinals won both, the first 4-2 and the second 3-2.

In the first of the doubleheader, the Cardinals’ Korean closer replaced reliever Kevin Siegrist and quickly retired the three batters of the Padres. The first batter up was Wil Myers who, at a 1-1 count, was grounded out. Oh then carded two strikeouts by taking out Yangervis Solarte and Melvin Upton, both with four-seam fastballs.

Oh relieved Siegrist once more in the next game to take the closing assignment. After flying out Alexi Amarista, Oh struck out Alexei Ramirez with a slider and Ryan Schimpf with a four-seam fastball.

This was Oh’s first outing since July 16 when he gave up his first MLB loss against the Miami Marlins.

Oh initially joined the Cardinals to take up the job as a setup man before the Cardinals’ All-Star closer Trevor Rosenthal. But Rosenthal hit a bad patch and struggled mightily. In his stead, Oh surfaced as the clear option for the closing job.

As of Thursday, Oh has two wins, one loss, 1.68 earned run average and four saves.

Elsewhere in the majors, Choo Shin-soo of the Texas Rangers, who’s been complaining about soreness in his back, has returned to the disabled list. According to the Rangers, Choo has inflammation in his lower back. He will be out for 15 days.

This is his third time this season to be placed on the Rangers’ disabled list. From mid-April to mid-May, Choo was out for a right calf injury. He then played in one game before pain in his left hamstring forced him on the disabled list once more. He missed the Rangers games from May 22 to June 13.

In the midst of his absence, Choo is batting .260 with seven home runs and 17 runs batted in this season.